You are at: Home page Her Work Discography The Akolouthia Of Nymphios 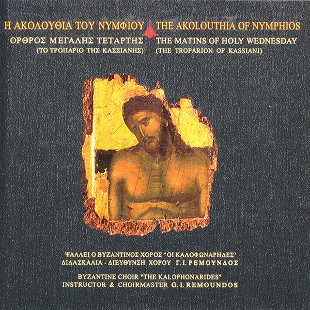 The masterpiece of the Byzantine music tradition, the Troparion of Kassiani and the Akolouthia (Service) of Matins on Holy Wednesday, sung by Yiorgos Remoundos and his choir, ‘The Kalophonarides’ ('The Fine Vocalists').
(barcode: 5204910000821)

To the memory of my teacher Simon Karas

In introducing this production I should explain briefly how it came about that the Domna Samiou Greek Folk Music Association undertook to make a recording of the Akolouthia (Service) of Matins on Holy Wednesday, thereby enriching its series of recorded productions through the addition of a work of Byzantine ecclesiastical music.

Five years ago I attended for the first time on Holy Tuesday Evening the Akolouthia of the Nymphios (Christ the Bridegroom) held at the Church of Kapnikarea in central Athens, an outstanding example of 11th century Byzantine architecture. It is widely acknowledged that the service held on this day is distinguished above all by the Troparion of Kassiani, which never fails to attract large congregations of the Orthodox faithful. I was taught to chant this Troparion not less than half a century ago by my late inimitable master Simon Karas. In all the intervening years I had never heard it sung as I had learnt it until I listened to Yiorgos Remoundos and his choir chanting it precisely as I recalled it; he too had been a pupil of the master. There and then I determined that we must preserve this masterpiece of music, a composition that takes more than twenty minutes to perform and leaves a lasting impression on all who listen to it.

The Troparion of Kassiani, undoubtedly one of the supreme creations of the art of chanting, has from time to time suffered from individual cantors who have dared to render it without due respect and humility. This was the reason why I proposed to Yiorgos Remoundos that he and his choir, ‘The Kalophonarides’ ('The Fine Vocalists'), on behalf of our Association, should record it together with the other hymns chanted at Matins on Holy Tuesday.

Johannes Kärcher, a German businessman and dedicated philhellene, offered to bear part of the cost of the production. I wish to thank him from the bottom of my heart.

I wish to thank also all who contributed to its production, in particular Father Yeorgios Metallinos, Professor at the Theological School of the University of Athens, for his profoundly revealing commentary.

As for Yiorgos Remoundos, it is my sincere desire that this production should mark the beginning of an enduring collaboration between him and our Association.

The ungrateful disciple and true love

The Hymnographers who composed sacred hymns for Great Tuesday in Easter Week took advantage of the opportunity presented by the Gospel reading of the day to analyse in poetic manner the distinction between Judas, the disciple who betrays the Teacher, and a minor character, a woman known to be a harlot, who recognizes Him through the eyes of true love. They are the chief figures on that particular day, and each of them reveals an aspect of the human soul in its relationship with God.

The harlot exemplifies the power of repentance, which transforms the sinner into a member of the heavenly kingdom, but also the genuineness of die person whose heart is pure. Aware of her sins, and humbled and repentant, the woman goes up to Christ the source of Joy, and conscious that he is approaching his crucifixion she anoints him with myrrh in readiness for his burial. His unsuspecting disciples have no inkling of the great events pending. Blinkered by the artless illusions of their so-called 'koinonismos' (sense of social order), they are indignant at the woman's action, considering it a pointless extravagance. But she is able to discern the essence of reality and not lose the ‘one thing that is needful’ (Luke 10,42), the one thing of which mankind stands in need.

Judas, the ungrateful disciple who turns traitor, is the very opposite of the harlot. ‘To all appearances a disciple, in fact already a murderer’ - so the hymnographer describes him. It is evident that he is neither the confidant of Christ nor a lover of mankind, for ‘suffering from avarice, he became a mis-anthrope’. He feigns concern for the poor, but makes a deal over the death of the Teacher. ‘The mask of charity conceals, while that of avarice reveals the nature of a person’. According to our Holy Fathers, in historical terms Judas re-enacts the Fall of Adam: he loses the 'new paradise', the Christian Church.

The antithesis between the Harlot and Judas makes plain that there is no certainty in human affairs. Very often the labels we attach to people prove false and without substance. The only thing that is certain and trusty is God. Our salvation does not depend on our own worth, but on the love of God. Judas is the embodiment of the tragic condition of whoever is devoid of Grace.

Today in all our Churches will be heard the well-known 'Troparion of Kassiani', that blessed nun and unrivalled voice in Greek poetic tradition. Though the poem makes no reference to her, it expresses in a most accomplished manner the thoughts and sentiments of the sinful woman of the Gospel who went up to Christ during the supper at Bethany, holding in her hand the precious myrrh to pour it over his head. The hymn, set to a melody of matching splendour, an outpouring of the soul of the great melodists of our ecclesiastical tradition, helps us all to experience the mystery veiled in the heart of this woman and to loathe the treachery of Judas.

In this way we are called upon to put the affairs of our life in order, though without allowing its prospect of eternity to be overshadowed by our attaching importance to small and trivial things, as Judas did, and so losing sight of the essential. But this requires us to open the eyes of the soul which we can do only by being in concert with the Grace of God. This is the challenge that Orthodoxy faces us with in Holy Week.

Protopresbyter Yeorgios D. Metallinos (2002)
Professor at the University of Athens