You are at: Home page Her Work Discography Carnival Songs with Domna Samiou 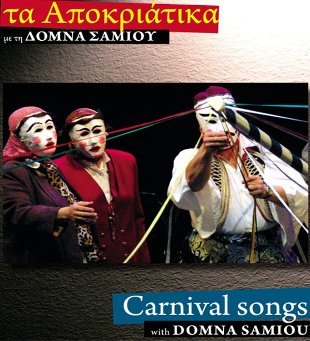 This recorded show includes stage performances of carnival songs and other related popular rituals from different areas of Greece, as they were presented at the Thessaloniki Concert Hall on the 4th of March 2003.

‘Dance - dance and enjoy your youth
for once it's gone, its gone forever’

It was with this song that my fellow musicians and I greeted the audience at a musical celebration in Thessaloniki in the spring of 2003. Guests of the Thessaloniki Megaron and its artistic director, Nikos Athineos, we had prepared a programme of Carnival songs, dances and customs garnered from the whole of Greece. We had invited musicians, singers, dancers and groups from Sochos and Kozani, Grammenitsa, Ioannina and Mytilene - places all where the celebrations and rituals of Carnival have retained their spirit and their authenticity to this day.

Of course, there is a logical explanation for these songs and traditions that we call profane', for it is at Carnival that country folk celebrate the start of spring and the end of winter and exult in Nature waking from her slumbers, in the riot of fecundity, in the resurrection, in the whole world being reborn. Life makes a triumphant comeback and death is vanquished, for now at least, and this is the miracle the people celebrate with feasting and intoxication, with dancing and revels.

It was this atmosphere of frenzied merry-making that we strove to convey on stage and then, when the programme was finished, in the foyer of the Megaron. The Kozani brass set the tone and we found ourselves - singers, musicians and audience alike - taking part in a real Carnival celebration of the sort 1 remember from my youth.

This DVD contains the recording we made then, hοping to have you singing and dancing alongside us. For it can only do us good to recall the wise words of the people as often as we can: ‘Throw yourself into the dance,
for it may be your last chance...’

Carnival: the sacred feast of the profane

The start of winter's end has forever been a crucial turning point, the change-over in the yearly cycle which hove the expectation of spring's cosmogonic transformations into view, instilling a need in country folk bound to the earth and their primeval beliefs to lend Nature a hand in Her task of rebirthing the world with magic rites; rites whose aim it is to summon supernatural powers, heavenly and chthonic, to ensure health, fertility and abundance for all that dwell upon the earth and all that grows in it - as one and indivisibly.

And because these farmers and stock raisers were sure the continuity of life itself hinged on the inviolability of these rituals, they celebrated them 'religiously' down the centuries and kept them insulated from the rationalism of another type of knowledge. Which is why, to this day, every culture has its pagan festivals and rites at this precise stage in the yearly cycle, through which the people can celebrate in advance the annual rebirth of the world in the endless cycle of the seasons with an outpouring of frenetic joy.

The Greek agrarian Carnival is one such ritual. The only entirely non-ecclesiastical feast of the year, it provides a joyous climax of renewal, a welcome breathing space in the year's rapid and relentless advance, and includes a host of ritualistic/theatrical features - some constants, some occasional - whose content is clearly magical. Excessive food and drink, orgiastic dances, disguises and gender swapping, mimetic performances with parodies of weddings or resurrection, cathartic bonfires, a deafening clatter of bells and other instruments, obscenity, the use of fertility effigies, representations of the act of copulation etc.

Amidst the generalized chaos of Carnival gatherings, the 'givens' of everyday life temporarily vanish: excess replaces frugality, levity sobriety, sensuality abstinence, lewdness propriety and anarchy order. As though the turning of the seasons brings with it an upturning of the social world.

It is not without significance that this spring feast of carnal pleasures coincides with a time for remembering, honouring and revering the dead which - linked, too, with the myth of eternal return - always escalated during this period of transition.

All Souls Day, a feast appropriated by Christianity and bound up with Carnival and Lent, may concern our own familiar dead, but it may also relate to the country folk's traditional Carnival costumes with their sheepskins, their bells and the frightening masked faces which are thought to represent the souls of the dead, spirits now in the Underworld. And to the comic performances enacted by the Carnival bands which, despite their improvisational nature, remain focused on death and resurrection, a theme on which they produce new and countless variations.

The idea of Death is an undercurrent running through each and every Carnival rite, most of which - culminating in Clean Monday1, the first day of Lent - take place in the openair on the fresh earth, highlighting in symbolic terms the duality of the earth which, as well as receiving the bodies of the dead, brings forth every form of life.

Indeed, Carnival's comic lexical and mimetic formulae centring on the equivocal motif of ‘ploughing' and copulation are based on the identification of Earthly and Womanly fertility. Thus identified, ploughshare and phallus become primary elements in the Greek rural Carnival, both as theatrical props accompanying the costumes worn and as a jocose metaphor in the songs sung, reiterating a promise of imperishability and eternity to people newly re-identified with Nature eternally reborn.

All of which reveals the triumph of life over death which, though terrifying and irreversible, acquires an ambiguous, salvational aspect through this link with the possibility of' Resurrection'. Death is shown to be life's volte face, since nothing really dies: it just returns to primal matter, retaining its generative power in perpetuity like buried seeds.

This conciliation with death gives people the existential freedom they need to perceive the equality of all mankind before the determinism of the world in which they live, and hence of the irrational basis of every form of social distinction. From there, it is the shortest of jumps to a worldview that calls every traditional value into question, which reveals the contradictions underpinning the entire social system, and which sees that everything is both relative and comic.

This is the source of Carnival's subversive, topsy-turvy spirit. Behind the masks and the comedic pretext, the phallus-wearing revellers and their companions (the symbols of their life-giving power rendered thus divine) vaunt the hidden truths of life in the uncensored language of the body and the revealing and daring words of the Carnival songs. The ageless and ephemeral law of the Carnival redefines everything afresh and on its head.

Visually, the subversion is achieved through this metamorphosis and disguise, the bizarre ways in which the masked revellers conduct themselves and their unexpected behaviours in even the most ritualistic of settings. It is impossible to define people by gender or by age; even by species. Men become women, the young old, the slim corpulent, the poor kings, men beasts, priests satyrs and rites farces. In this upside-down world, outspokenness is legitimized, along with sacred scurrility, the transgression of the most powerful taboos, the desecration of sanctity, the flaunting of proscribed sexuality.

The irrational is presented as rational, lies do away with the truth, opposites settle on a compromise and social rules are subjected to laws of nature that are usually ignored. People who are not what they seem sing songs that do not mean what they say. Because - amidst the misleading barrage of jovial, light-hearted, playful, sage and saucy language - they are in search of an equivocal way of properly expressing their criticism of and protest against everything wrong with the world; of expressing their - albeit short-lived - revolt against everything that represses them; of opening - and bearing witness to - the can of worms to which everyday morality insists on turning a blind eye.

For her performance at the Thessaloniki Megaron Concert Hall, Domna Samiou chose a representative selection of songs, dances and Carnival customs from different parts of Greece with a view to conveying as well as possible the ethos of this spring-time ritual as it is actually celebrated. The first verse of the first song encompasses the essence of the evening as a whole:

Dance the dance,
for this earth will swallow us all
Well all enter in
this earth we tread...

Which is the age-old joy-in-sadness/sadness-in-joy of the Greek feast. We want this to be more than a concert or a performance; we want to help you experience Carnival for yourselves.

1A day on which the Greeks head for the countryside or other areas of greenery to fly kites and eat a Lenten meal outdoors on tablecloths lain on the ground.

It is the custom every year

All Day Long I Reaped

I Have Grown Old, Goddam It

I Have Grown Old, Goddam It

It Is the Custom Every Year

It is the custom every year to mark these days and weeks with dances for young swains and maids that mothers may rejoice. S...

It Is the Custom Every Year

It is the custom every year to mark these days and weeks with dances for young swains and maids that mothers may rejoice. S...

Together With My Aunt Kontylo (Explicit)

Together with my aunt Kontýlo I made towards the mill one day, biyirné-biyirné-biyi-biyi-biyirné. I elbow her, she elbows m...

What am I, poor wretch, to do with the wife I’ve got? In Jan’ry month and Feb’ry too she leads me off to harvest. I reaped ...