You are at: Home page Her Work Discography By the Flowering Oleander 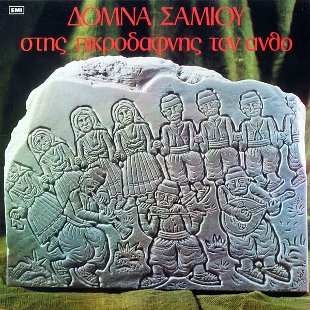 Another classic LP of Domna Samiou which brings together some of the masterpieces of Greek traditional folk music. It is a representative compilation of songs from different areas of Greece performed in an authentic way in respect of their lyrics, music and way of singing.
In 2008 it was included in a box-CD by MINOS EMI under the title ‘Mia zoi tragoudi’ along with the LPs 'Farewell Holy One', 'Souravli' and 'A stroll with Domna Samiou'.

Greek folk music is directly and closely tied to acts, customs, chores and ceremonies linked to human existence and social and family life in villages or country societies. Most of these activities, and probably some of the music accompanying them, originated in times of remote antiquity.

The predominant metrical form of Greek folk song is the fifteen syllable iambic metre, with a caesura after the eighth syllable and two main accents, one on the fourteenth, and another on the sixth or eighth syllables. It is the metre in which much Byzantine popular, satirical and even religious verse has been written.

The singing of most Greek folk songs involves extension of the given line by the repetition of syllables, words or phrases, or by the interpolation of extra syllables or phrases.

In the islands the music tends to be light and delicate in character, with dance rhythms based on short, lively ostinato phrases, while in West Crete it has an heroic flavour, since the area was for many centuries the focal point of fierce struggles between Greeks, Saracens and Turks.

The music of Epirus uses anhemitonic pentatonic scales which rarely occur in other parts of the country. The most popular instrument of the area is the clarinet which usually plays in the lower register in combination with the fiddle and the lute. Macedonian folk music is based on faster and more intricate metric patterns of the ‘aksak’ type (e.g. 11/16: 2 + 2 + 2 + 2 + 3: 16). And the Macedonians are especially fond of the zournas (an oboe type woodwind instrument) and the daouli or large drum, which accompanies the zournas with masterful virtuosity.

The following quotation, taken flom Chianis ‘Folk Songs of Mantineia’ furnishes an appropriate conclusion to this brief note. ‘Surveying the folk music of Greece .... one cannot fail to recognise the supreme position the music occupies in the village. In its simple and uninhibited method of expressing love, patronism, natural phenomena, happiness, or profound sorrow, folk music is an inseparable element of peasant life. As one peasant so aptly expressed it: Our songs, like sun, are our life’. Markos Ph. Dragoumis (1976)