Musicologist and researcher of the Greek music tradition and heritage 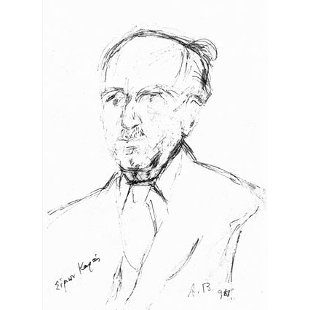 Simon Karas (1903-1999) was a musicologist and researcher of the Greek music tradition and heritage. His lifelong research is considered by many as a key factor in the preservation of traditional music, which he recorded throughout Greece.

He was born in 1903 in the village of Lepreon (former Strovitsi), of the Ilia Prefecture, Peloponnese. From a very young age he was introduced to music by his father, who played the tambouras, and the village’s priest, who schooled him and encouraged him to continue with his music studies.

In 1921, having been admitted in Law School, he moved to Athens; he finished it without ever getting his degree. He began studying music and researching on his own. He studied the writings of the Ancient Greeks, the Byzantine and post-Byzantine writers; he searched, decoded, and interpreted old music manuscripts of various libraries (Patriarchate of Constantinople, Mount Athos, National Library etc.). Thus, he developed into a unique self-taught ‘music master’ (mousikodidaskalos).

From 1931 to 1934, Karas was a chanter at the Agios Elissaios church in Monastiraki, Athens. In 1929 he had founded the ‘Association for the Dissemination of National Music’, in which he developed until his death an extremely rich activity on the art of psalmody and traditional singing; the association included a school of a free six-year attendance, a church choir, a mixed national songs choir, and a dance group.

The association's choirs appeared on a regular basis in the show 'Greek Echoes', presented by Simon Karas himself, on traditional music from all around Greece; the show was broadcasted at the Greek National Radio from 1937 to 1972. He released hundreds of books and albums, especially after 1972.

He had recorded on tape folk songs from all around Greece, which were released in numerous albums, as well as all the Church Hymns.  He died in 1999 at the age of ninety-six.