You are at: Home page Domna Samiou A Tale of a Life Listening and Learning Music

Since then, when I was a little child, my ears would absorb every music and sound. My father used to chant very well. He was not a chorister, but he did chant and sing very nicely. I remember that when he would get back from work, he would sit me on his knees and bounce me singing little nursery rhymes. So, slowly slowly as a small child, my ears would absorb all these sounds.

The church of St Nikolaos was close by, and every Sunday we would go with my father to follow the service. Of course it was not out of religious zeal, but because I liked the music. For me it was a bit like going to a concert. Slowly I learned all the liturgies by heart, and all the different services of Easter. I remember that I had learned by heart a hymn from the end of the Salutations in which one small child stands in front of Christ and another in front of the Virgin Mary, and I could sing it all.

Unfortunately I could not chant inside church, because girls were not allowed to chant. Whilst boys of my age could enter the chancel and help the choir singers. I also wanted to go to the chancel but I could not. But in winter at home in the shack, my sister, my mother, my father and I, would all sit around the brazier, since it was the only way to get warm. My sister was not very interested in chanting and my mother was out of tune. But my father and I would chant. He would be the priest and I the deacon, or he would be the left choir singer and I would be the right. I used to get great pleasure from that. Even more so when lent and the week of Easter would arrive, I would be in the seventh heaven!

Apart from visiting the church, I used to get a lot of satisfaction from attending all night vigils. The women used to hold such vigils in their homes during autumn and winter. If, for example, they had a child that was ill, they would vow to hold a vigil if it recovered. So, when the child would get better, or if any other prayer where they had made such a vow was answered, they would borrow the holy icon from the church or from a neighbour who had a miraculous icon of Christ or the Virgin Mary, and would announce to the neighbourhood that 'tonight we will hold an all night vigil for Christ or for the Virgin'. They would position the icon and a receptacle with sand for the women to place their candles and we would congregate. I was always among the first to go and to start chanting. The older women used to urge us 'Go on, chant. You are children and god listens to you because you are innocent'. I knew all the church services and liturgies by heart, so I was getting great pleasure chanting.

All the children from the neighbourhood, since the church was very close, we would go for funto watch baptisms, weddings and funerals.You could almost say it was like going to the theatre for us, since there was nothing else in the neighbourhood. I remember there was a café called Poseidon's and they would place this little box, a radio, outside. You could hear it in the whole neighbourhood. Depending on the direction of the wind you could either hear it clearly, or the sound would be blown away and you heard it just faintly, and then it would return again. That must have been in 1936, when radio broadcasting started. In the nearby Pangrati, there was also the first cinema I ever went to, called Pallas. I remember the first time I went. It was a Sunday afternoon and when I entered it was still light outside, but when I got out it was dark. That seemed so strange to me. How could it be that it was light when we entered and dark when we exited?

What I want to say is that all our entertainment at the time was either in social events or celebrations in our homes. Relatives and neighbours would congregate for weddings or during carnival and would make merry. We would also celebrate name's days, because back then we didn't even know what birthdays were, we didn't celebrate them. We didn't even really know when people had been born. When you would ask when someone was born, or when they got married, they would answer: 'when so and so did such and such, that is when I got married'. So you did not really know.

There was also a small café, next to us, old Mr Alekos' café. At the back of the café they would sell tinder, charcoal, coke and there were also barrels with wine. I recall that every autumn he would line up the barrels, go inside and scrape them with a scraper and rinse them out thoroughly. Then a car would bring the must and he would fill them up. And all the women of the neighbourhood, and us too as children, would rush with our little cans to get some must, so as to make moustalevria1.

Neighbours would go to this little café in the evenings to drink a bit of wine or ouzo, eat a little meze2 or olives or preserved sardines. And the ‘jukebox’ of that time would come by. It was a man carrying a gramophone with a flower horn. He would carry the gramophone under his arm, the flower horn over his shoulder and a tin case with 78 rpm records. He used to do his rounds around the taverns. He would place his gramophone on one of these folding metal tables, people would order a song for the price of a drachma or half a drachma,and he would play, for example, Chariklaki3 for you. It was the time when people from Asia Minor had started recording their own songs here in Greece. Songs like Lemonadika or Hasapaki... Since the audience was from Asia Minor, they listened mainly to those songs.

Since our shack was on the corner, our neighbours would inevitably pass through the lane outside to get home. I remember the grocer who lived at the other end of our row, Mr Vangelis. A handsome proud man with a nice large moustache. He was a good person with six children. He would walk by after having a few drinks, staggering a little, and singing amanedakia4. And my father would say: 'Vangelis has been drinking again'. 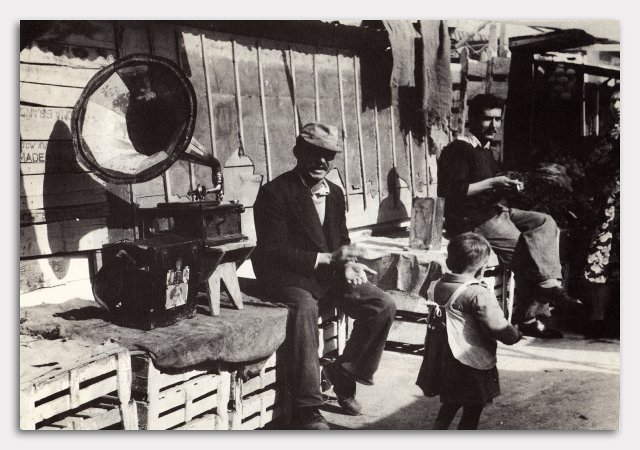 My sister was older than me and she too completed her elementary schooling. I remember that in her last year at school, after her final exams, a celebration had been organised for the children. They performed little sketches and sang songs they had been taught. My sister also participated in one of the sketches and I used to watch them rehearse. I must have been about nine years old at the time, and I had learned one of the songs and used to sing it at home. Amazingly, I still used to remember that song till very recently. I would pick up any song I heard that came out at the time, be they Western5 or rebetiko6. From my early childhood I would always be the first to pick up any new song or dance.

I like that type of music since then. I didn't know about classical music. No one had spoken to us about it. I remember at school, I do not recall in which grade, they told us that someone, called Mr Koutsimanis, would come (I do remember his name ever since), who I think played the cello. He placed it among his legs and began to play various tunes. It was the first time in my life I saw such an instrument. In Kaisariani there were various musicians who played the violin or more commonly the oud. There was an Armenian who played the oud. He had probably brought it from back there. The only thing my mother had brought with her was a small blanket.

It was later, when I went to live with the Zannou family, that I first heard other types of music. During the German occupation, I remember that concerts would be held at the Pallas on Voukourestiou street, with conductors such as Vavagiannis and Paridis. I remember that Vali, Alekos and I would often go. During the German occupation we used to listen to really good classical music.

1Moustalevria: traditional sweet made of must and flour.
2Meze: small dishes usually accompanying wine or other alcoholic drinks.
3Chariklaki: popular song of the time.
4Amanedaki: diminutive for amanes, a slow melancholy song in the oriental style.
5Songs in western rhythms such as waltz, tango, rumba.
6Rebetiko: style of urban underground folk songs developed mainly by refugees from Asia Minor in the interwar period .