You are at: Home page Domna Samiou A Tale of a Life Next Stop: Savvopoulos' Rodeo Club

Overcoming the shame for traditonal songs

By 1971 we reach another turning point in my life: my meeting with Dionysis Savvopoulos1 and his invitation to me to sing at the Rodeo Club2. I must say that until then it had not even crossed my mind to sing in front of an audience. Everything I had done till then, I had done it out of pure love towards folk songs. It had never occurred to me that I could actually sing. So the first time Dionysis invited me to sing, I did not dare to go, because I knew that [the Rodeo] was frequented by students and that the youth had no interest in traditional songs. Dionysis being intelligent, realised that it was an opportunity and finally convinced me to go in 1971, during the dictatorship. 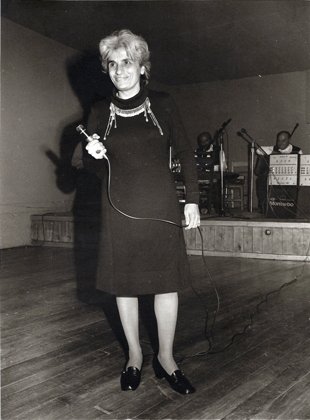 I remember Tasos Chalkias played the clarinet, Aristides Moschos the santur, Aristides Vassilaris the flute, Nikos Stefanidis the kanun, Mathios Balabanis the goblet drum and Chonis Aidonidis sang. And finally one evening we dared to go to the Rodeo Club to sing. To catch the audience’s attention, I got Chalkias to play a mourning song from Epirus and then I sang an akritic song called Kostandas. It is an old song and it is said that it refers to Constantinos Palaiologos3. After that the audience burst into applause and my heart settled back in its place. We went the next week as well. We went to sing three times, but we stopped because I had to go to London, believe it or not!

During [these concerts] at the Rodeo Club, Mrs Lina Lalandi, who had founded the Bach Festival in London, was here in Athens. She invited Karas to participate, but he did not want to because, as I recall, the 150th anniversary of the Greek Revolution4 was to be celebrated. Karas could not go, so Mrs Lalandi approached me and told me: 'Come to London to sing heroic songs'. 'Me in London?' [I thought]. I was afraid to go, ashamed. She too convinced me. I set up a group and we went to London in April. That too was a new beginning. Because the following year Mrs Lalandi invited us to go again, with an even bigger group. After that I participated five times in the Bach Festival.

That is how I sang the first time in front of an audience, with Dionysis Savvopoulos at the Rodeo Club. Young students heard the traditional songs and began to understand that something was happening. Till then they did not have a clue what traditional music meant. So after that they started inviting me to sing at events in the University. Very shyly the kids started getting up and dancing, someone from the Peloponnese, another from Thrace, another from Macedonia and yet another from Crete. So the shame that people had for traditional songs began to be overcome.

1 Dionysis Savvopoulos (1944- ): Popular Greek composer and singer strongly involved in the struggle against the military dictatorship in Greece (1967-1974).
2 Rodeo Club: Club in Athens frequented at that time by a young anti-dictatorship clientele.
3 Costantinos Palaiologos (1405-1453): Last emperor of the Byzantine Empire.
4 Greek Revolution: the Greek war of independence against Otoman rule, which commenced in 1821 and led to the foundantion of the modern Greek state. 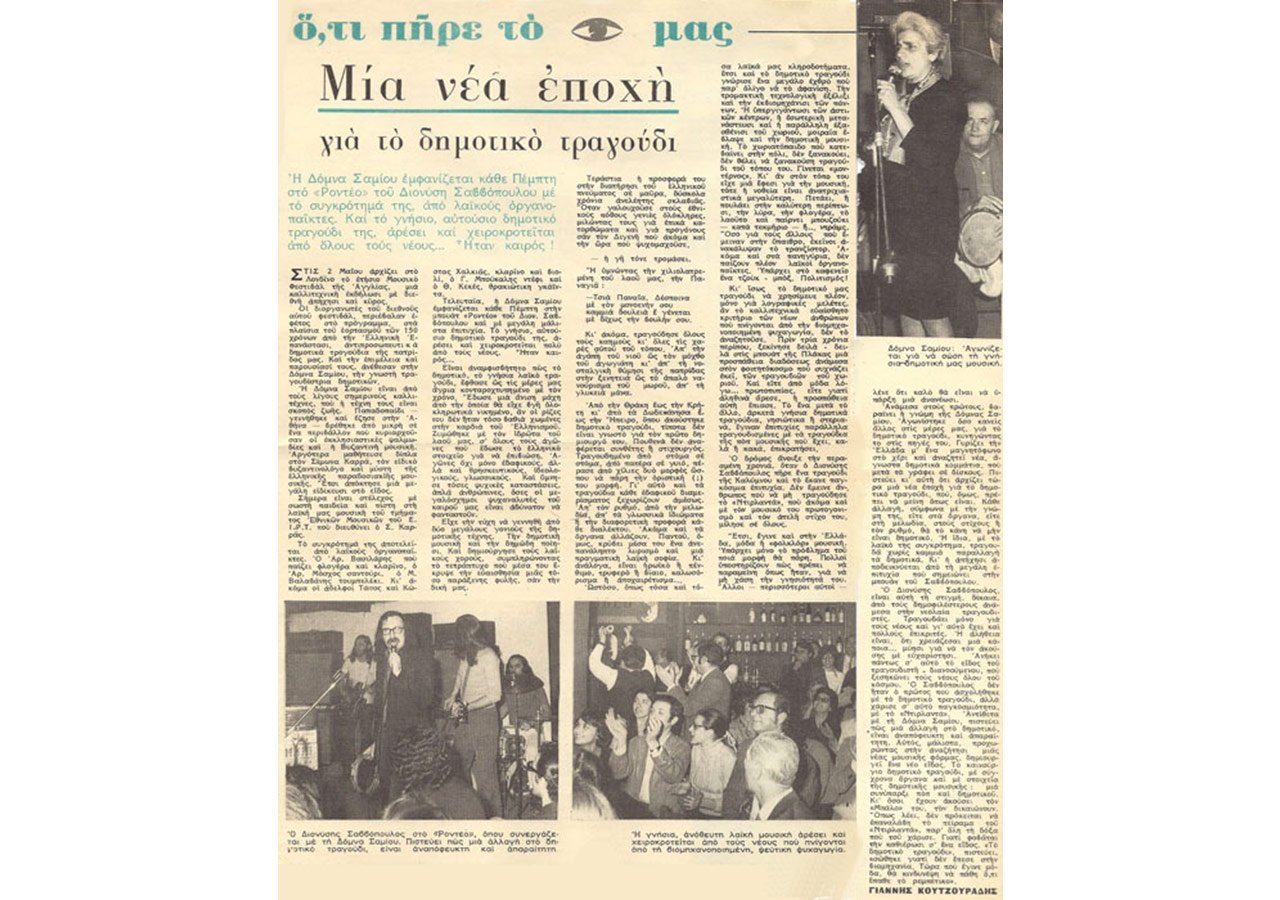 A new age for the folk song