You are at: Home page Her Work Collaborators Yiorgos Remoundos 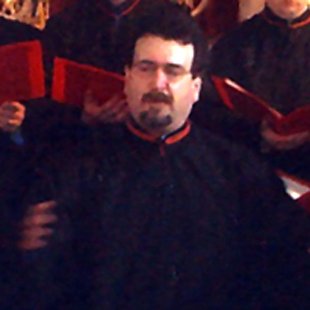 [1954-2022]. Born in Nikea of Piraeus. He is a graduate of the Law Faculty of the University of Athens. He began his musical education in Greek ecclesiastical music in 1968 at the then newly established school of Byzantine Music of the Holy diocese of Nikea. Later he enrolled in the school of the ‘Society For The Dissemination Of National Music’ studying music under Simon Karas continuously until 1993. During the period from 1990 to 1993, he taught Greek ecclesiastical Music (Byzantine Music) and Folk Singing at the aforementioned school. In 1990, he obtained a degree of Byzantine Music from the music school F. Nakas, having studied under Lykourgos Angelopoulos.

In 1991 was placed as first chanter in the University Church of Kapnikarea of the Entry of the most Holy Theotokos into the Temple, where he remains until today. He also created an exemplary byzantine choir composed of 20 members that has the name ‘Kalophonarides’ (Good voiced ones); the choir has participated in many performances in and outside of Athens and has taken part in radio and television broadcast programs on the state radio and on television stations.

He has already circulated his first album, accompanied by a book titled: Oxeia, Vareia, Petasti.

Glory of the Ainoi: The woman who was a sinner...

Eccleseastical hymn 2nd Mode. Glory to the Father and to the Son and to the Holy Spirit. The woman who was a sinner hastened to the market, tha...

Eccleseastical hymn The Ainoi (The Praises). 1st Mode. Let everything that has bream praise the Lord. Praise the Lord from the Heavens; praise H...

Eccleseastical hymn Press to listen the hymn Glory to the Father and to the Son and to the Holy Spirit. Now and ever, and to the Ages of Ages. Amen. The Hymn of Kassi...

Eccleseastical hymn The Exaposteilarion. 3rd Mode. I see Your Bridal Chamber adorned, O my Saviour, and I have no wedding garment, that I may en...

The Idiomela Stichera of the Aposticha

Eccleseastical hymn The Aposticha. 2nd Plagal Mode. 6th Mode. Today Christ comes to the house of the Pharisee, and a sinful woman approached Him...

Eccleseastical hymn THE KATHISMATA 3rd Mode. Τhe harlot came to You, O Merciful Lord, pouring out on Your feet myrrh, mixed with her tears, and...

The Kontakion, The Oikos and The Synaxarion of Holy Wednesday

Eccleseastical hymn THE KONTAKION (To be read, not chanted) 4th Mode I have transgressed, O Master, more than the harlot, but I have not offere...

The eighth Ode of Kanon with its Katavasia

Eccleseastical hymn The 8th Ode. 2nd Mode. The Heirmos. When the tyrant's order prevailed, the furnace was fired sevenfold. In it, the Children ...

The ninth Ode of the Kanon with its Katavasia

Eccleseastical hymn Deacon or Priest: The Theotokos and Mother of the Light, honoring with hymns, we magnify. The 9th Ode. The Heirmos. Gome,...

The third Ode of the Kanon with its Katavasia

Eccleseastical hymn THE CANON The 3rd Ode. 2nd Mode. The Heirmos. You have edified me on the rock of faith. You have opened wide my mouth again...