You are at: Home page Her Work Collaborators Eleftheria Arvanitaki 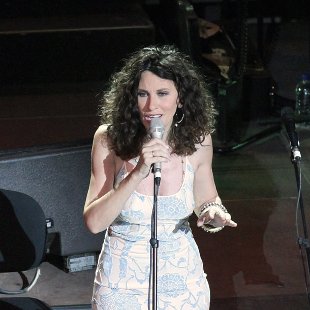 Born and raised in the Kallipoli area in Piraeus, Eleftheria Arvanitaki's family's origins can be traced to the islands of Ikaria and Paxoi. Her first collaboration was with the 'Opisthodromiki Kompania', a group of amateur Rebetika musicians who played songs by Tsitsanis, Papaioanou, Vamvakaris and others. Her first appearance in recording was her participation in the record Ta barakia by Vangelis Germanos. Simultaneously she started performing live with Dionysis Savvopoulos.

She has performed at the Womad Festival and numerous jazz and ethnic music festivals.
Her work has also circulated under international music labels, spreading her reputation beyond Greece.

Τρελέ τσιγγάνε. By Vasilis Tsitsanis Crazy gypsy, where’ll you go, all alone at dead of night? Parting from you fills my heart with a yearning that persists. ...