You are at: Home page Her Work Collaborators The Greek Byzantine Choir 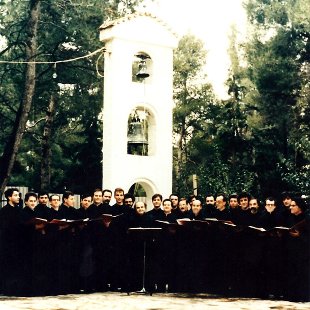 The Greek Byzantine Choir was founded in 1977 by Lykourgos Angelopoulos and his colleagues, with the aim of presenting to the public the traditional Byzantine Music as it has been transmitted until the present day by both the oral and the written tradition. The Choir also aims at preserving the genuine Byzantine tradition by freeing it from the influence of the Western Music.

It has taken part in more than a thousand concerts, in liturgies and other events in Greece and in thirthy other countries in Europe, Asia, America and Africa. Among them, the all-night vigils at the Mount Sinai Monastery (1983), in Cologne (1985), at the Mega Spilaion Monastery (1987), at the Monastery of Vatopediou in Mount Athos (1995) and at the Cathedral of Saint Dimitrios in Thessaloniki (1993).

In 2000 the Choir participated in the Divine Liturgy of Christmas in Bethlehem for the two thousand years celebration since the birth of Jesus Christ. The Choir has also taken part in many Greek and foreign festivals.

Since 1993 nine albums have been published under the name of the Choir, in Greece and in France as well as several recordings and volumes.

Members of the Greek Byzantine Choir (in alphabetical order):

Θεοτόκε Παρθένε. Eccleseastical hymn O Virgin Mother of God, hail, Mary, full of Grace, the Lord be with thee. Blessed art thou among women and blessed is the ...