You are at: Home page Her Work Collaborators Evgenios Voulgaris 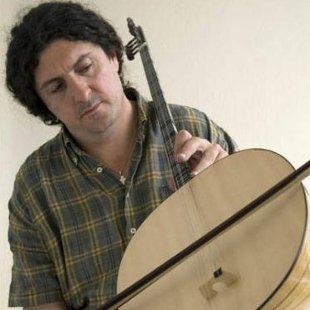 Evgenios Voulgaris holds a diploma in Byzantine music. Since 1992 his main focus has been on the oud and traditional Greek music. His first teacher was Christos Tsiamoulis. He studied yayli tanbur with Fahrettin Çimenli, who also tutored him in the interpretation of makams and in improvisation.

He has participated in numerous performances and recordings with a wide range of musicians. Since 1995 he performs with the 'Orchistra ton Chromaton', playing mandolin and bouzouki, whilst in recent years he has also collaborated with the 'Camerata' Orchestra and the Athens State Orchestra.

He taught in the School of Greek Music of the Municipal Conservatoire of Patras, in musical highschools and seminars, as well as in the Department of Popular and Traditional Music of the Technical University of Epirus. In 2007 his book Urban Popular Songs of the Inter-war Period: Rebetika of Smyrna and Piraeus, co-authored with Vasilis Vandarakis, was published.

His records to date are Taxidia, To minima tou pringipa, and Apsilies in collaboration with other artists. He has also set music to parts of the Rubaiyat by Omar Khayyam and composed music for theatrical plays.

Μια γαλάζια περιστέρα A blue dove, oh, a blue dove flew by. Flying from mountain to mountain she was searching for her mate. My love so far awa...

I Left It All Behind & Theonitsa

I Throw Myself over the Walls

I Will Sing Tonight

If I Want Black Eyes

If You Want to Wed

Πέρσι το καλοκαιράκι Last summer, I set my heart on a little bird. But though I chased her, catch her I could not. I set my lime twig trap, m...

May Your Window Catch Fire

Το παραθύρι σ’ να καεί May your window catch fire and your door cave in so I may get my hands on your divine body. You sit at your window with ot...

Σγουρέ βασιλικέ μου My curly basil, when did you grow so and spread your branches, little one, and steal my wits away? Oh curly basil, dear li...

A nun was frying fish and a voice, a shrill high voice, kept telling her again and again: 'Stop cooking, old maid, and Con...

On the Mountains of Bursa

Ποιος είδε πράσινο δεντρί Whoever saw a tree of green, with eyes of black and a blond sheen and royal blue leaves to boot, eyes black, eyebrows dark...