You are at: Home page Her Work Collaborators Ilias Yfantidis 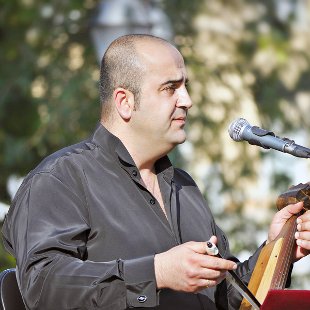 Born in 1976 in Athens. He grew up in a family of deep musical tradition, with the sound of the Pontic lyra; his grandfather played the lyra as well.

At the age of seven he began his music studies at the Hellenic Conservatoire of Athens and in other conservatoires. Up until he was fifteen he played the bouzouki. In 1991, he joined for two years the dance society of the Pontic Association of Agia Varvara ‘O Faros’, where his first contact with the Pontic tradition took place. The following year, he started lyra lessons at the ‘Efxinos Pontos’ Pontic Association of Korydallos, with Yiorgos Amarantidis, who also helped him cultivate and develop his talent in singing.

At the age of nineteen he released his first personal album entitled Ego Pontiopoul’ eimai ta’ onoma m’ en Ilia. Apart from lyra he also plays the Pontic bagpipe and the flute. Other personal albums include the following: Pontos… opse – osimeron kai panta and Avdes Pontou.

He has participated in many concerts, events, music and theatre shows, in Greece and abroad, playing the lyra and singing. He has also collaborated and participated in the recordings of many artists.

He teaches the lyra as well as the Pontic dialect and music; moreover, he writes lyrics and composes music. He has also created works for musical theatres, on the history and culture of the Pontic Hellenism.

Ακρίτας πάει και σο κυνήγ' Out hunting, on the way to the hunting grounds, Akritas met Charon at a crossroads. - Charon, what've you got against me th...

Αϊτέντς επαραπέτανεν An eagle soared high in the sky, high in the heavens with its bloody red jaws and its soot black crown and clutching a brav...

Σιμά σα ξημερώματα Close to daybreak, dawn’s crack in the East, the Morning Star aloft, first light near at hand. The sun was a- telling, ‘dau...

Ο Μάραντον Word came calling Marandon up to fight. He forged horseshoes out of silver and nails out of gold and shoed his horse in the...

Somewhere in the Aegean Sea

Somewhere in the Aegean Sea, oh, my heart, my heart, so distant, so far away, my heart is fit to burst. A vessel richly fit...

Τ' ορφανέσας το νυφέπαρμαν & Ξένε μ' ξενιτεμένε They stay with the bride for two days, for three, Her dress they give her and her veil, but no wedding crown.1 Beloved st...