You are at: Home page Her Work Collaborators Mathios Ventouris 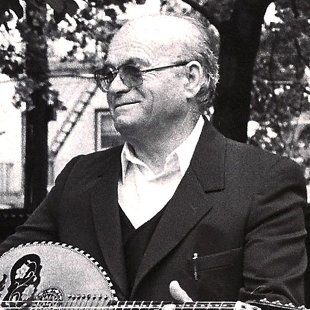 Lutist and singer. He was born in 1916 on the island of Kimolos. He learned how to play the lute from an elderly lutist compatriot of his. He played the lute at feasts and weddings on Kimolos from a young age. Apart from being a musician, he worked as a sailor and carpenter.

When he moved to Athens, he played and sang for years with Dora Stratou’s band. He worked with Domna Samiou in television and the radio, as well as concerts and disc recordings.

A Widow Bore a Child (The Song of Porphyris)

Χήρα-ν παιδίν εγέννησε A widow bore a child and called him Prosfylis, she bore him behind bars, she suckled him in a prison. Aged one, he took up ...

Gone with My Scarf

Λεν ήρθι Μάης κι Άνοιξη May's come, May's come and spring, summer’s come when the perfumed roses bloom. I've a white rose I want to dye and if I...

Now the Birds (A Soldier and a Tree)

Τώρα τα πουλιά Now the birds, now the swallows, Now the partridges do not cease singing and saying: – Awake, my lord, awake, my good lord,...

Τέσσερα τζιαι τέσσερα Four and four make eight,  Four Palikari go to the wars. On their way they are hungry And they sit down to eat, but they ...

Widow, change your name, don't let them call you widow, for you make my eyes weep night and day. But why don't tell us the...