You are at: Home page Her Work Collaborators Michalis Tterlikkas 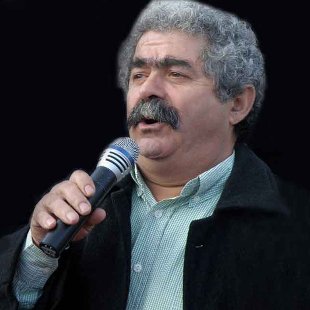 Born in 1955 in the currently occupied village Capouti of the district Morphou, where he lived until the Turkish invasion in 1974. He studied electronics in Athens, and returned to Cyprus where he lives.

His occupation with the Cypriot folk music began in 1983, and he took byzantine music lessons under Theodoulos Kallinikos, a leading Greek Orthodox cantor and researcher and interpreter of traditional Cypriot music.

He collaborated with the refugee folkloric group 'I Adouloti' – Shakalli, participated on a number of radio and television programmes in Cyprus as well as abroad; he also took part in traditional music festivals.

Since 1992 he has been head of the musical troupe 'Mousa' (Muse), which performs solely on traditional Cypriot instruments, giving concerts both in Cyprus and abroad.

Η Αροαφνού In the neighbourhood close by, up in Koilanin there are three beautiful maids and they are singing. One shrill, one deep of...

The Abduction of Levandis’ Daughter by Digenis

Η αρπαγή της κόρης του Λεβάντη από τον Διγενή The lord of the East and the king of the West met to discuss joining their lines in marriage. When they came out of the cou...

The Abduction of Levandis’ Daughter by Digenis

– Wait one moment, Digenis, and I’ll tell you what to do. If you understand what I tell you, go abduct the bride. Take this...