You are at: Home page Her Work Collaborators Antonis Apergis 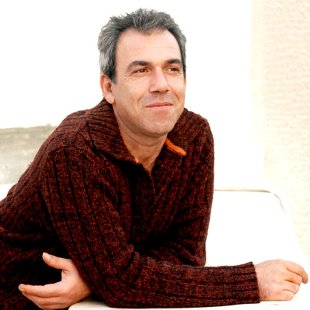 Antonis Apergis was born in 1963 in the suburb of Nikea in Piraeus. A composer as well as a song writer, he also plays the guitar, oud, kanonaki and double bass. He has collaborated with some of the leading figures of contemporary Greek music. Following his first record, a solo recording of oud, he collaborated with Kostas Pavlides, composing the music and lyrics for two records, Vgale ftera kai peta and Poia ge kai poia patrida.

He carried out the musical arrangement for records by Petros Dourdoubakes and the 'Opisthodromiki Kompania'. In recent years he has performed his music and songs with his own group. His recordings include the orchestral Ikaros, To Stefani (with Sofia Assyhidou on vocals) and Nyhta me asteria (with Lizzeta Kalimeri and Kostas Pavlides on vocals).

A Maid Was Singing (The Wife Scorned)

Κοράσιν ετραγούδαγε A maid was singing in a high-walled palace. The wind swept her voice out to sea and every ship that heard it reefed its sai...

I Wish for All the Months in Turn

I wish for all the months in turn, await them all with longing, but not, o not, the month of March when folks embark on trav...