You are at: Home page Her Work Collaborators Kyriakos Gouventas

Born in 1966 in Thessaloniki. He studied Theory of Music and violin at the Conservatoire of Northern Greece and collaborated with the State Orchestra of Thessaloniki as well as with chamber music ensembles. He is a member of the Ensemble of Traditional Music of the municipality of Thessaloniki.

Since 1980 he has collaborated with many musicians and orchestras in Greece and abroad, in traditional music concerts, but also in classical music, rebetika, and entechno music concerts. He has taken part in more than a thousand concerts and musical events, as well as in numerous recording sessions.

Founder member of the orchestra Estoudiantina Neas Ionias. He was also chosen by the School of Oriental and African Studies (SOAS), University of London, to represent Greek traditional music in the Festival ‘Geniuns of the violin’ (2004). 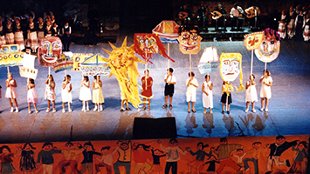