You are at: Home page Her Work Collaborators Karyofyllis Doitsidis 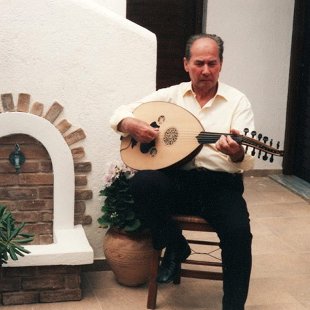 Born in 1930 in Karoti, a village of Didymoteicho in the Evros Prefecture of Thrace. He plays the oud, he sings and composes.

In 1960 he formed the Doitsidis Group, a local dance music group which participated in musical events, at first in Thrace and later on throughout Greece. Between 1958 and 1968 –year that he settled in Athens– he participated in programmes of the Komotini radio station.

He has taken part in international song festivals and in concerts inside and outside Greece; from 1968 to 1973 he participated in performances at the theatre 'Dora Stratou'.

Together with his daughters, Theopoula and Lambriana, he has formed a trio, singing and playing the music of Thrace; the trio has recorded a total of eighteen personal albums, and has also taken part in other artists’ recording sessions. In 1985 the family won in Paris the first prize of the French Embassy, for its eleventh album, To Kastro tis Thrakias.

He has been awarded several times for his contribution in the salvage of Thrace’s musical heritage. For this purpose, from 1980 to 1994, he held a meeting point called 'Thrakiotiko Steki', where only songs of Thrace were sung.