You are at: Home page Her Work Collaborators Petros Kourtis 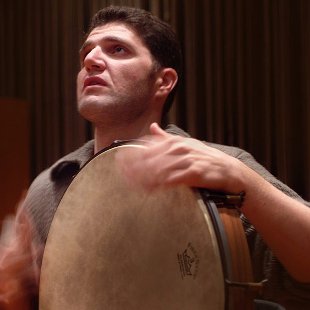 Petros Kourtis was born on Lefkada island in 1969 and has been playing percussive instruments from the age of 14.

He studied classical percussion at the Municipal Conservatory of Zografou, graduating in 2000. He continued his studies at the Βerklee College of Music in Athens, where he studied ethnic percussion at the side of great musicians.

In 2004, he took part in the Opening Ceremony of the Athens Olympics, as a percussionist. In 1995, he founded the “Iasis” music ensemble. In 1997, he founded, with Vangelis Karipis and Andreas Pappas the percussion group "Krotala". In 2006, the group collaborated with Loreena McKennitt in her record An Ancient Muse. He has also worked with various artists both in the studio and in tours in Greece and abroad.

Since 1994, he teaches percussion at the “Philippos Nakas” conservatory. He has written books on learning percussive instruments.

He collaborated with Domna Samiou in 1996, playing percussive instruments at her concerts.