You are at: Home page Her Work Collaborators Yiorgos Kotsinis 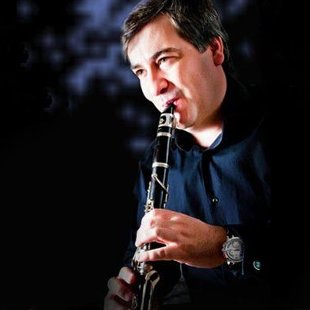 Born in 1969 in Athens. He comes from Strativista, a village of the historical Municipality of Pogoni, in Ioannina, Epirus, where was introduced to traditional Greek music. He began by playing the flute, while at the age of eleven he began playing the clarinet. A student of Tassos and Petro-Loukas Chalkias, Nikos Philippidis, and others.

He holds a degree in Byzantine music (Skalkotas Conservatoire, class of Lykourgos Angelopoulos). He also studied Eastern music and the kanun, in the class of Agnes Agopian, and Harmony. Apart from the clarinet, he also learned how to play other wind instruments, such as the kaval, the ney, and the flute.

For a number of years he taught clarinet at the Pallini Music High School. He has collaborated with various institutions and cultural associations on traditional music educational seminars, in Greece and abroad.

He has participated in concerts and recordings of traditional music in Greece and abroad (N. America, Cuba, Australia, Asia, and in almost every European country), in collaboration with numerous institutions, researchers, and musicians. He is also a soloist in many orchestras, such as the ERT Contemporary Music Orchestra.

He teaches at the Athens Conservatoire, and is the cultural director of the department of traditional music of the ‘Philippos Nakas’ Conservatoire. He has written two books on the art of clarinet.