You are at: Home page Her Work Collaborators Aristides Moschos 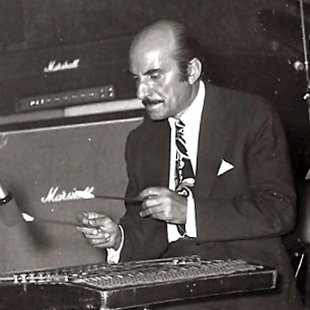 Born in Agrinio in 1930, the fifth out of ten children, into a family of musicians. His first contact with the santur took place at a very young age, around eight, revealing his great potential. His father, who was also a musician, owned two music venues in Agrinio; it was there that young Aristides made his debut as a santurist.

After the war, he left Agrinio and moved to Athens, where he attended the Lyceum Club of Greek Women. With the Lyceum he toured around the world. He collaborated with many renowned musicians of his era and excelled in the traditional songs of the Aegean islands and Smyrna. He also participated in many radio and television programs on traditional and folk music.

He released fifteen personal albums, of which three received a gold and two a platinum certification. He also played as a soloist in around one hundred and fifty albums.

In 1985 he founded the ‘Traditional Music People’s School’. It functions as a non-profit organisation, where several musical instruments as well as Byzantine music are taught. He also formed a choir. The school toured in Greece and also appeared in many festivals and musical events abroad.

He was honoured by several municipalities and organisations as well as by the Greek Parliament. He died in November 2001.

From Your Sweet Eyes

In Smyrna, in the Armenian Quarter

Η αγάπη μου παντρεύεται My love is to wed and marry my rival, but it’s not that that pains me so, it pains me that she's asked me to be their best ...

The Mule, the Mule