You are at: Home page Her Work Collaborators Tassos Chalkias 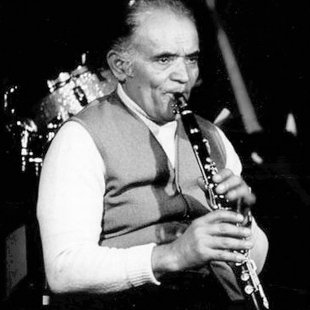 Prominent clarinetist. Born in 1914 in the village Fotino of Ioannina, Epirus, and died in 1992 in Piraeus. He was the youngest member of the Chalkias music troupe, which he joined at the age of seventeen. The troupe played in feasts of Epirus during the summers and in Athens during the winter.

In 1940 he fought in the war; in 1941 his wife and two children were killed during a German bombing. He joined the Greek Resistance and fought with the Greek People's Liberation Army (ELAS).

After the war, the Chalkias troupe was reformed and started releasing albums and touring in Greek feasts. From 1958 to 1963 Tassos Chalkias lived and played music in America. After his return, he formed in 1964 a new family troupe, performing in various music venues in Athens. He returned to America for another three years, where he recorded approximately one hundred and eighty songs. He came back to Athens for good in 1970.

During his career he participated in concerts and musical events, as well as in numerous albums of renowned artists and recordings for the national Greek radio. His personal discography includes, among others, the following albums: To klarino tou Chalkia (1967), Epirotikos gamos (1973), Epirotiko glenti (1976), Athanata klarina (1984).

After his death, his clarinet was donated to the Museum of Traditional Greek Musical Instruments 'Phoebos Anogianakis'.

A Second Voyage to Greece