You are at: Home page Her Work Collaborators Vangelis Psathas 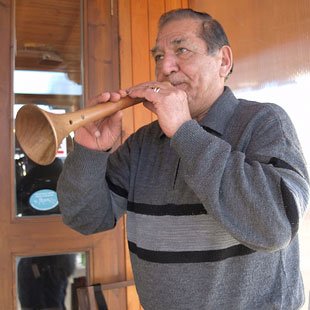 (1936-2012). Born in Naousa, in the Prefecture of Imathia, Central Macedonia. He plays the zournas. From a very young age, following the example of his older brothers, he manufactured and played with improvised flutes. A few years later, his mother bought him a clarinet and he joined Tsiafka’s band, where he got his first music education.

In 1955 he began playing in local events; since then he has been taking part every year in the local custom ‘Gianitsaroi kai Mpoules’, which takes place during the Carnival celebrations. In the beginning of his career he was accompanied by his brother Mitsos, who played the davul (daouli). Together with his brother and later with his children, he has been awarded with distinctions in Greek and international festivals. He has also taken part in various recording sessions.

In 2008, he was awarded the position of honorary professor of the Department of Music Science and Art at the University of Macedonia.