You are at: Home page Her Work Collaborators Yiorgos Koros 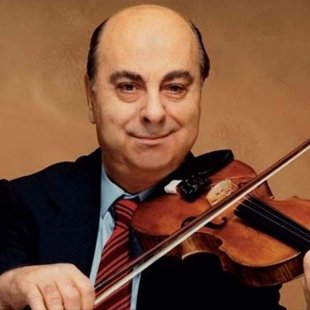 Born in 1923 in the village Andronianoi, on the island of Euboea. He lives in Athens and plays the violin. He began playing at the age of eight, when his father –who was a church chanter and a teacher of Byzantine music– decided to replace the mandolin with a violin. His professional career began a few years later, when he started playing at weddings and over festivities with his father.

He was one of the first musicians to introduce the violin into Greek folk music. Since 1947 he has collaborated with many Greek musicians. He has composed more than a thousand songs, and many of his albums have received gold and platinum certifications. His presence in Byzantine music has been of equal importance.

Come All You Birds

Ελάτε όλα τα πουλιά Come all you birds to make dough, help O Virgin, now gold has merged with pearl, help O Virgin. I make a round loaf for the...

Έχε γεια Παναγιά In Galatá a shower falls, a downpour in Tatávla. The loveliest of all the girls is she who's dressed in black. It was nothi...

When You Want to Get Married Stranger