You are at: Home page Her Work Collaborators Pontic Society 'Argonautes-Komninoi' 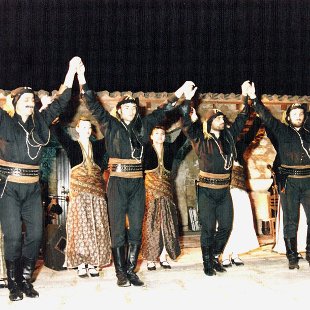 The Pontic Society ‘Argonautes-Komninoi’ was founded in 1930 by Pontic Greek refugees of the coastal cities of Trabzon and Giresun, who settled in Kallithea (Athens) after the 1923 population exchange between Greece and Turkey.

The aim of the society is the preservation of the Pontus cultural heritage. The society has its own dance group, while there is also a Pontic dances, a music, and a theatre department, where traditional dances and musical instruments are being taught.

The society’s dance group has participated in numerous dance music events throughout Greece, but also abroad –Europe, Asia, America, and Australia–, as well as in various television channels. A list of its performances includes the following: Europalia (1981), traditional dances festival in Marseilles, television show in the Netherlands, Beijing Olympic Games (2008), etc. The dance group was also taken part in the Closing Ceremony of the Athens Olympic Games in 2004.

The society organizes and participates in numerous seminars and conferences, concerning the cultural heritage of Pontic Greeks.