You are at: Home page Her Work Collaborators House of Culture of Nea Karvali

House of Culture of Nea Karvali 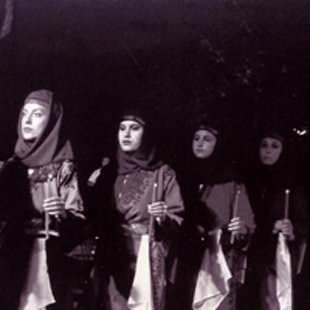 The House of Culture of Nea Karvali was founded in 1981 and consists the continuity of the first ‘Educational Organization Nazianzos’, founded in Istanbul in 1884. Its main aim lies in the protection and spread of the folklore tradition of the area.

It has one of the largest traditional dance groups, with more than one hundred and seventy members, awarded with medals and prizes in Greece and abroad. Moreover, the House of Culture founded the international folklore festival ‘Sun and Stone’, which more than seventy countries participating worldwide.

It has a library and an education department on traditional crafts; in addition, a great collection of authentic traditional costumes from all over Greece is exhibited at the ‘Museum of Fabric’. An important moment in the history of the House of Culture was the founding of the ‘Historical and Ethnological Museum of the Greek-Cappadocian Civilisation’, as well as of the ‘Centre of Cappadocian Studies’. The museum was awarded by the European Commission, receiving in 1997 the European Museum of the Year Award.

The group took part in many of Domna Samiou's concerts between 1984 and 2000.