You are at: Home page Her Work Collaborators Markos Ph. Dragoumis 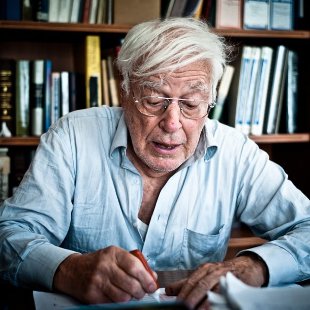 Born in 1934 in Athens. He studied piano, Advanced Music Theory with the composer I. A. Papaioannou, Byzantine music with I. Margaziotis and attended the School of Simon Karas for two years (1958-60). In 1962, after the completion of his studies in Athens, he went to the University of Oxford to study musicology at a postgraduate level (with a British Council scholarship) with Egon Wellesz.

He returned to Athens in 1964 and was appointed professor of music and head of the music department at the Athenian College; he resigned in 1988. From 1970 to 2003 he taught History of Music at the Athens Conservatory and since 1975 he has been director of the Musical Folklore Archives of the Center of Asia Minor Studies, founded by Melpo Merlie in 1930.

He has published a great number of books and articles, as well as albums of ethnological interest, participated in international musicological congresses (giving lectures in both Greece and abroad), and is a member of the International Musicological Society. In 1991, the Athens Academy awarded him for his overall contribution to music.

I Love a Lot My Little Bird