You are at: Home page Her Work Collaborators Yannis Dobridis 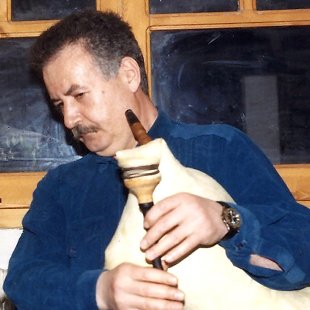 My name is Dobridis Yannis and I was born in 1955 in the village Ladi of Didymoteicho, in the Evros Prefecture, Thrace. I finished primary school in Ladi and I graduated from high school in Soufli. During the last year of high school, with the help of my fellow-villagers, I built a bagpipe (gaida) and began struggling with it and the other way around, trying to learn how to play. After graduating from the Radiology Department of the Technological Educational Institute of Athens, and completing my military service (of twenty-eight months!), I was hired at the Hippokration Hospital of Thessaloniki.

In the meantime, I was playing and learning the bagpipe (gaida), getting acquainted with well-known people, like Chronis Aidonidis, but also with not so famous ones, like Yannis Strikos. The former helped me understand some things on the music of Thrace, and the latter introduced me to the Thracian lyra and to playing at the ‘Anastenaria’ ritual. During these thirty years, I was lucky enough to collaborate with artists such as Domna Samiou, Dionysis Savvopoulos, Ross Daly, with various associations, to travel abroad, participate in recording sessions, and to pass along knowledge to young ones. Nowadays, I am mostly into gaida and lyra building and less into playing because, luckily, there are many young artists who can play well.