You are at: Home page Her Work Collaborators Yiorgos Amarantidis 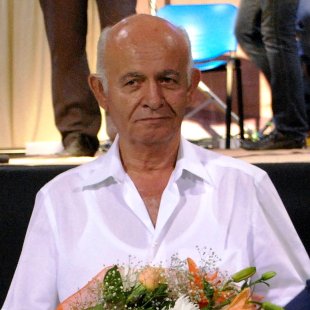 Yiorgos Amarantidis (1944 - 2013) was born in Kapnohori, Kozani; his parents were refugees from Ano Matsouka of Pontos. At a young age, he started playing the Pontic lyra, in the company of his father Stathis Amarantidis and of local musician refugees from Pontos.

Between 1973 and 1984 he played the lyra at the theatre 'Dora Stratou' and also performed at many events both in Greece and overseas. He performed at the Opening Ceremony of the World Athletics Championships in Athens in 1977 and also at the celebration for the Olympic Games Centennary at the Kallimarmaro Panathinaiko Stadium. His has a genuine traditional style, which has remained untouched by modern elements.

- A Cretan ship, nor large nor small, just two and forty cubits long, brought me to strange and unknown lands. - O alien, ...

Πασχαλιάτικα δίστιχα Easter has come round again, throw out the koukouràs1 and put a red egg laid this year upon the ikon stand2. Glad returns o...