You are at: Home page Her Work Collaborators Eleni Tsaouli 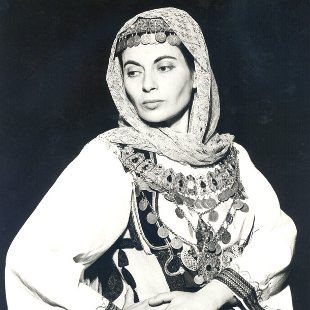 (1928-1978). Eleni Tsaouli was born in Nea Smyrni, Athens, to parents refuges from Smyrna. She began ballet lessons in her childhood, despite the difficulties of the time.

Later, during the German occupation (1941-44), she joined the Greek Resistance organisations EAM and EPON. In 1947, at the age of 19, she was imprisoned for her previous actions in the Averoff women's prison. There, she came in contact with women from the countryside and learned from them dances, songs and traditions.

In 1954, she began her collaboration with a team of young dancers who would form the core of the future Greek Folk Dance Group, which became official in 1959 with the aim of "recording, preserving and disseminating Greek dances".

She began touring the countryside to collect dances, costumes, customs and children's games from the folk tradition of Greece. Concurrently, the Group appeared in shows and concerts throughout Greece and abroad, in Greek costume dramas and documentaries.

The fundamental principle concerning traditional dance was the conscious separation of the dance in its original form and the dance as presented on stage with the necessary adaptations (folklore) .

"The first is necessary for the dancers' education and helps them understand the idiom and authentic mode of expression of each locality in depth. When, however, a set of dances is transplanted outside its natural space and divorced from the authentic bearers of tradition (musicians, singers, dancers), then facts like theatrical rhythm, unity of music and the visual aspect of the performance in general need to be taken into account. That means that the 'choreographer-director' can move more freely and more creatively and not within the narrow confines of a badly understood authenticity, but keeping authentic the mental participation of the performance’s contributors".

Following her death, the group took on her name as the Greek Folk Dance Group 'Eleni Tsaouli', and continued its activities guided by her principles.

Domna Samiou collaborated with Eleni Tsaouli and the Group from the beginning of her career in 1971 to 1995, in over 160 concerts in Greece and abroad, and in disc recordings.