You are at: Home page Her Work Press Clippings and Interviews The Herodion flooded in tradition

The Herodion flooded in tradition

Tradition is awaiting us at the Herodion1 with unique and precious sound bytes of Greek music, in a venue which [had remained] 'impregnable to folk song'. On Tuesday the 19th and Wednesday the 20th of September, Domna Samiou,the great lady of traditional music, together with a group of two hundred exceptional musicians and collaborators, will take us on a tour of the areas where Hellenism flourished, tradition was formed and memory was born.

The great singer will sing karsilamas, zeibekiko and hasapiko2 songs from the coast [of Asia Minor], an old Byzantine ballad from Propontis3, and a stunning lament from the 'Asia Minor catastrophe'4. The extremely old song from Thrace 'Nightingales of the East and the birds of the West', dealing with the sacking of Andrianople, will be sung by Chronis Aidonidis. [....]

Petro-Lukas Halkias, the virtuoso of the clarinet in the Epirus style will accompany groups of singers from Northern Epirus, who will present their famous polyphonic songs. The young virtuoso of the clarinet Nikos Philippidis will play Macedonian tunes to dances and the troupe 'Argonautes-Komninoi' will present the impressive male and attractive female dances of Pontus, which hark back to antiquity. Equally ancient, charming and rare are the dances of the Greeks of Cappadocia, with their Byzantine grandiosity. Ceremonial dances with swords, candles and spoons, that will be presented by a troupe of refugees. Cypriot tradition will not be missing from the grand tour of memories, with older songs from the akritic cycle and Karsilamas dances.

1Ancient theatre bellow the Acropolis in Athens.
2Types of music from Asia Minor.
3Propontis: Sea of Marmara
4Asia Minor Catastrophe (or simply the Catastrophe), refers to the defeat of the Greek army in Turkey in 1922 and the subsequent forced removal of the Greek population of Anatolia. 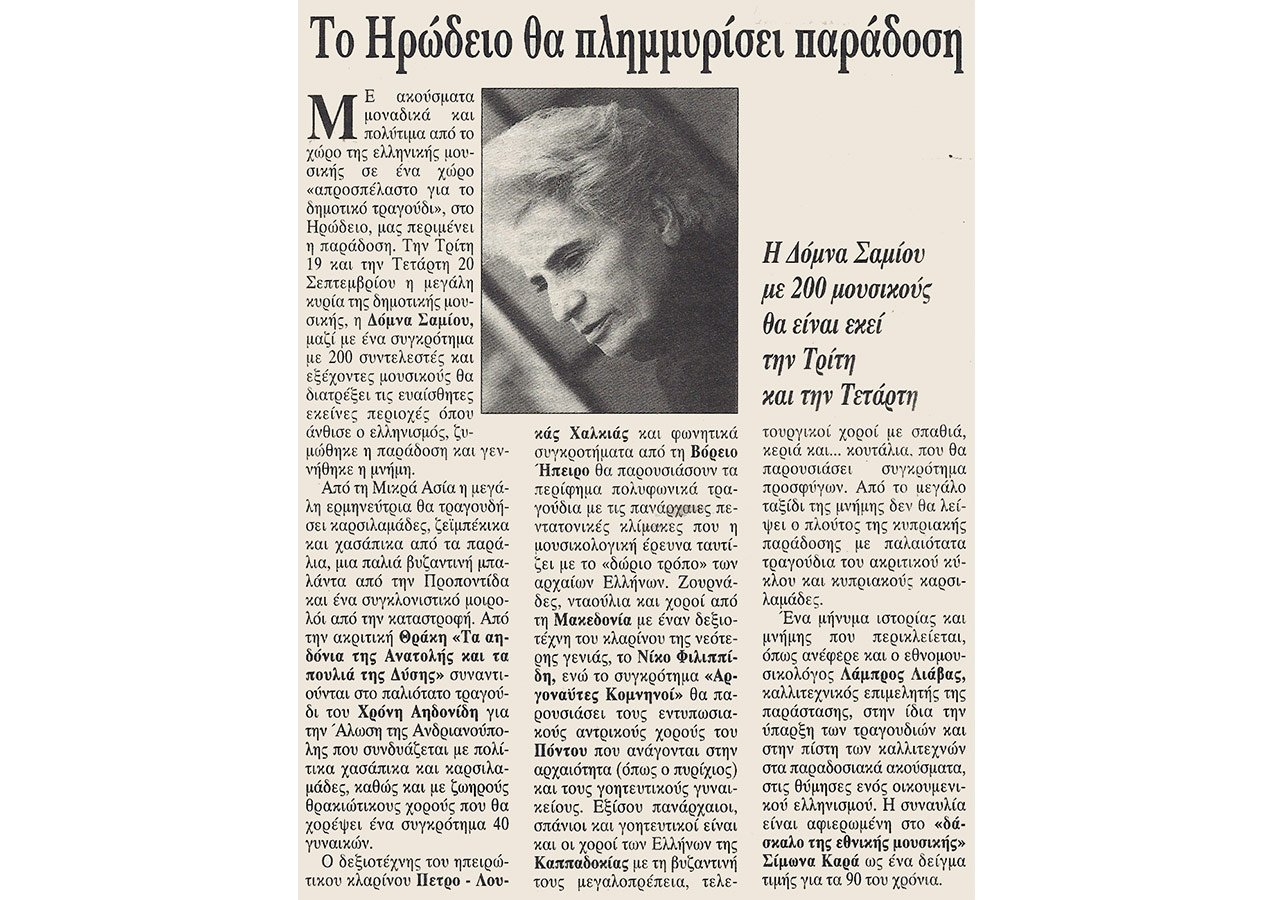 The Herodion flooded in tradition