You are at: Home page Her Work Press Clippings and Interviews The sound in shadow theatre

A unique experience awaited the visitors of the Tsarouchis Museum1 in Maroussi a few days ago (Tuesday and Wednesday the 23rd and 24th of September). The president of the Tsarouhis Foundation, Niki Gryparis, had been striving for three years to overcome the practical difficulties of reviving one of the classical plays of the Spatharis family2 accompanied by live music, in a parallel event to an exhibition on the influence of the shadow theatre on Tsarouchis's work.

'The roasting of Athanasios Diakos'3 was performed on the berdes of Evgenios Spatharis, which was set up on the street outside the museum, as used to be done in the past in neighbourhoods. The audience was both moved and overcome with laughter, as it rediscovered an entire world. An art form which is in danger of falling into the margins, since it was labelled 'children's entertainment'. However in former times audiences of more than a thousand people, mainly adults, would  congregate to enjoy Karagiozis, the most wholesome and directly functional popular theatrical form of later day Greece.

Even though the reports in the newspapers focused on the happening at the closing of the event, when Alekos Fassianos4 impersonated a sacristan, I believe that the most important element of this initiative was the revival of the live orchestra with Domna Samiou and her group, which accompanied and underscored the action, as in the classical performances of shadow theatre.

During the 1920's and 1930's in Athens, one of the most best jobs for folk musicians was playing at one forty or so Karagiozi theatres, each of which employed on average about five musicians. The singers names featured on the programs and were announced on posters, since they were one of the elements that drew the crowds. It is no coincidence that some of the leading players of Greek shadow theatre were also exceptional singers. Foremost among them the famous Mimaros, who was also the precentor at the church of St Andreas of Patra (proving once again the indissoluble link between traditional song and our Byzantine musical tradition).

Hence the spectator discovers the inspiration and the art with which Greek shadow theatre combines visual and acoustic elements, creating a wonderful combination and unity between speech, music and movement.

The songs and tunes [in the plays] make the identity of each character immediately recognisable, describe his disposition, ethos and personality and underscore his involvement in the dramatic action. It is an exceptionally symbolic use of music, which results in a uniquely succinct and condensed description of very complex theatrical characters.

A Karagiozis performance could be considered a form of opera. Isn't the movement that the master gives the puppets, in fact a form of dance? And aren't the sung voices which the master mimics by changing the tone, rhythm, accent and the colour of his voice,  in a combination of acting and singing, a form of music? And one other thing that Evgenios Spatharis reminded us of in the performance of 'Athanasios Diakos', is that the traditional artist is also a great improviser of sounds. He employs all manner of vocal tricks, as well as tins, cardboard, pieces of wood, crackers etc to mimic the sound of thunder, a row, the wind or the waves.

Participating in the emotions and the general satisfaction that you could see portrayed on the faces of the spectators at the Tsarouchis Museum, I contemplated what a strong blow for the sound of Karagiozis was dealt by the use of recorded soundtracks from 1960 onwards. It impoverished the repertoire, as it limited choices. It put an end to the playful use of imagination with which [the master] chose the song depending on current events, the reactions of the audience, his own mood or that of the singer. 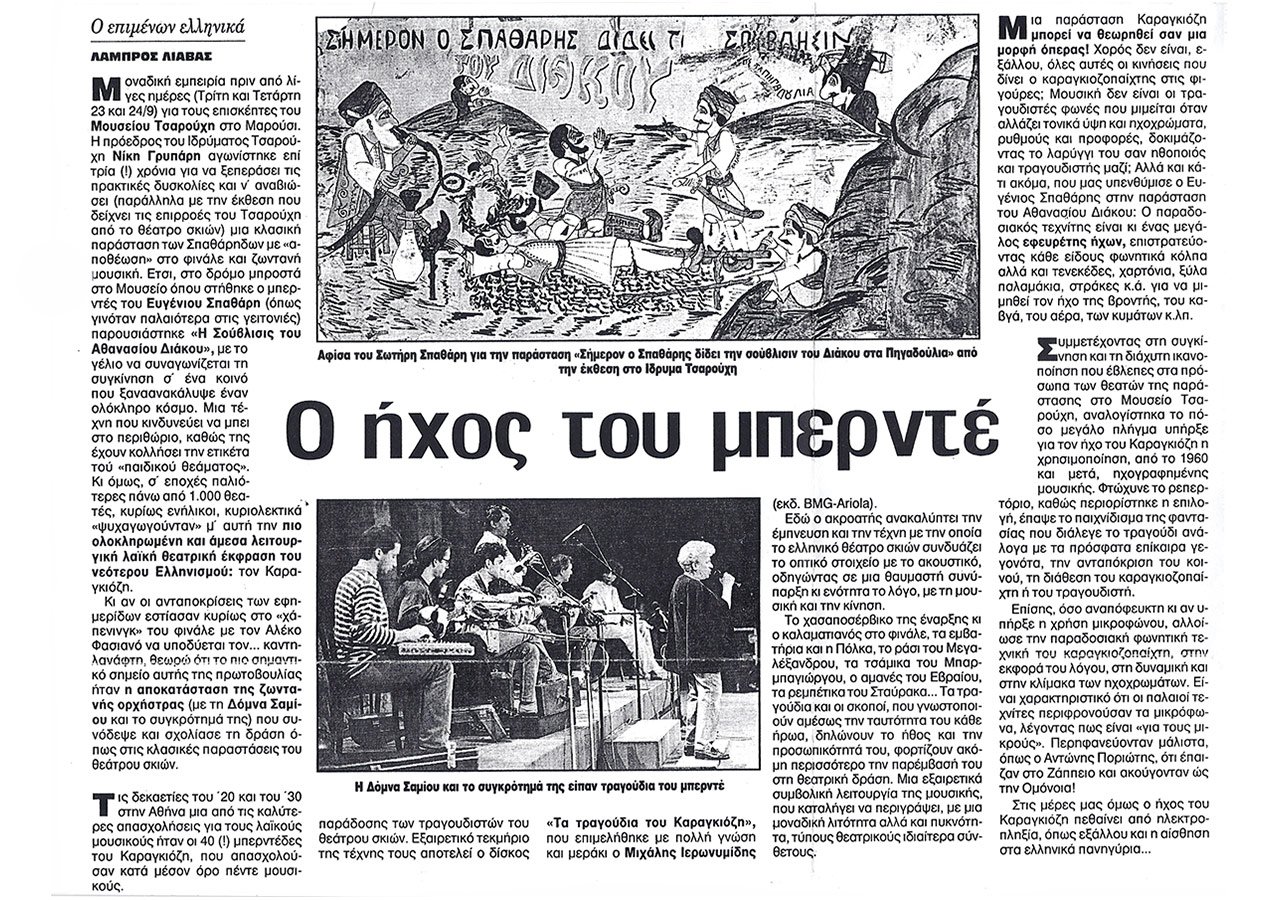