You are at: Home page Her Work Press Clippings and Interviews Domna's song collection for Easter

Anything you ever wanted to know about traditional Greek Easter song and festivities but couldn't even fathom to ask is included in Ta Paschaliatika (Easter Songs) - a set which includes two CDs and a bilingual booklet. Through this Easter focus, the listener is taken on a mystic trek through tradition, with lyrics and music which convey deep-rooted ritualistic traditions that have stood the test of time.

These springtime songs of death and resurrection were originally passed down by word of mouth and appear to stem back to pagan times, with symbols of ancient worship taking on new meaning when applied to the Christian faith. Fertility goddesses make way for Christian rebirth, and other pagan rituals relating to life and death have been disguised to accommodate Christianity.

The works, selected under the supervision of acclaimed folk singer Domna Samiou, portray the mosaic of influences on folk music: from its primitive, occult roots evident in Zaphiris (song for a game played throughout spring) and the Byzantine chime of Glory Be to Every Day; to the mediaeval beliefs in supernatural forces conveyed through the style and lyrics of works like Evyenoula with symbols like white birds and black swallows to show the forces of good and evil and the Turkish lyrics of the Cappadocian Leilalim (Lilac-sweet) with its Anatolian interventions to show how Greek culture was influenced by Islam during the 400 years of the Ottoman occupation. No matter what the influence, the one common denominator is the works' commitment to the Orthodox faith.

Ethnologically speaking, the listener learns about traditional Greek society, especially the woman's role in it. Take for instance the 'Lazarene' ritual which is something of a debutante's entry into society. The girls, of a nubile age, are initiated under the leadership of an experienced 'Lazarene', in a place and in conditions of ceremonial seclusion and comradeship often secured by an oath. This is a rite of passage of a mundane, religious and social nature which leads the young girls out of childhood and into maturity and marriage. After this initiation, they are forever referred to as 'Lazarenes'.

What makes these spellbinding songs even more intriguing is the very fact that they are still sung. These songs still play an active role in communal worship and festivities. After all, in the series of laments of the Virgin, the listener is taken to churches around the country to hear background commotion as the service is in procession. One can almost smell the incense! Others still, such as the children's chimes take us to school playgrounds and conjure images of skipping-ropes and rhythmic stomping. True enough, Samiou's selection takes us on a spring romp around the country to areas which have yet to be touched by time.

There are two strands to the focus: ritual songs (dirges and ceremonial songs in CD A) and dance songs (used for communal village feasts in CD B). Ethnologist Miranda Terzopoulou's text helps give greater insight into the hidden meanings of these songs as well as explain how the songs play an active role in Easter celebrations. The carefully selected use of old and new photographs to illustrate the text also stress how the music is still relevant and applicable to communities even today.

Even if folk music is not your cup of tea, owning the set is worthwhile for its encyclopaedic value and variety of songs. 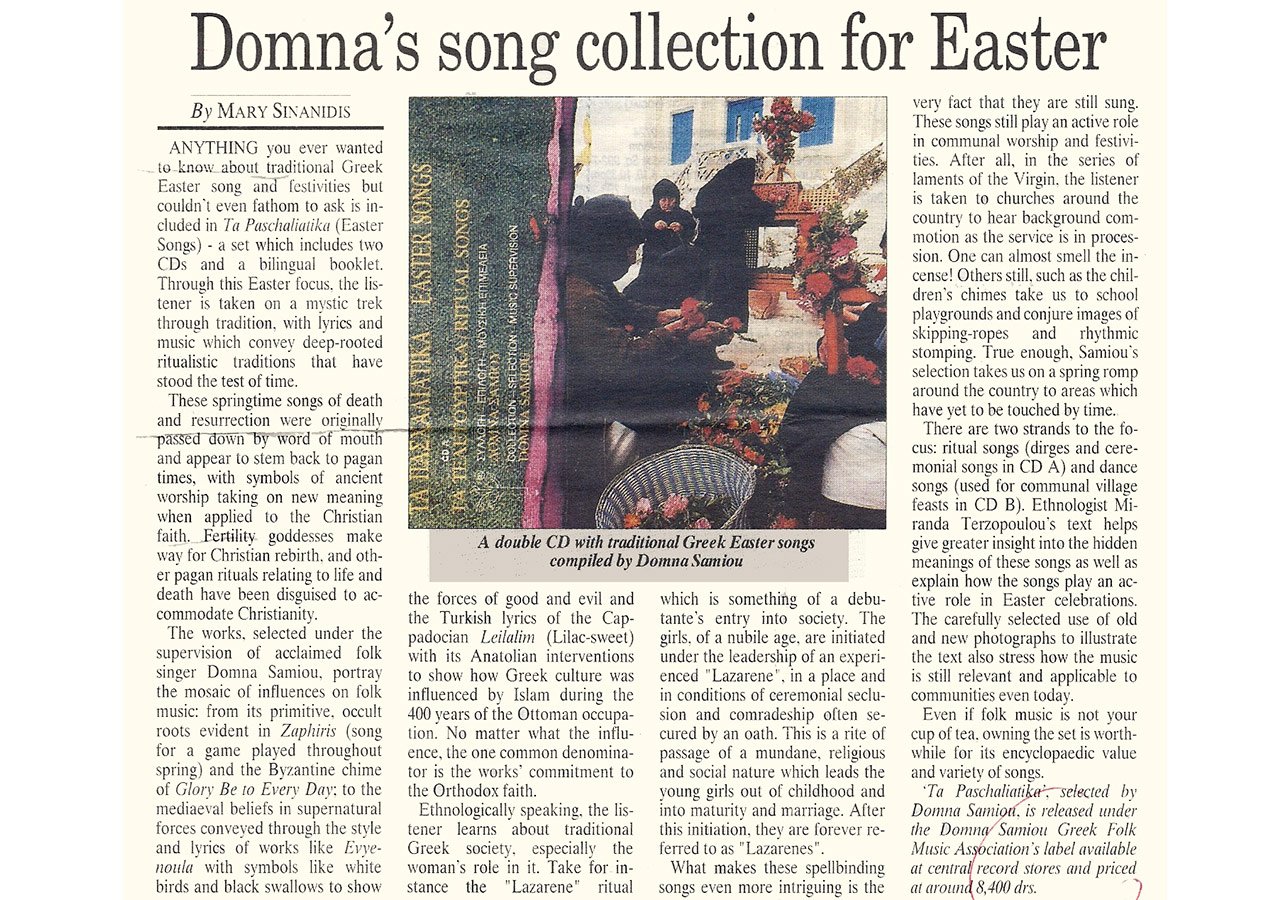 Easter Dance Easter has come round again, throw out the koukouràs1 and put a red egg laid this year upon the ikon stand2. Glad returns o...

Glory Be to Every Day

One Easter Day, One Sunday

The Sinner One Easter Day, one Sunday, on a holy day, my little bird, a mother was adorning her son one Saturday from dawn to dusk, ... 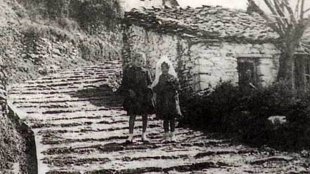 Sweet Basil of the Holy Cross

Sweet basil of the Holy Cross and royal flower of Christ, I strolled around your garden and round your flower-beds. I pic...