You are at: Home page Her Work Press Clippings and Interviews A living reality, with vibrant tangible functions

Domna Samiou performs every Monday at the 'Kytaro'

If you happen to wonder into the 'Kytaro' on Epirou street on a Monday night, and hear Domna Samiou singing the Tzivaeri or Your Kerchief Yanni, there is no doubt that you will feel moved. You will not be moved in the same way as you might be listening to any other music or song, however beautiful. You will be moved in a way that only the expression of a familiar heartfelt yearning can move you. A yearning that involves you. A yearning from a space that you too belong to.

Petite, sturdy, austere and very sweet, Domna Samiou seems to converse with you when she sings, with tunes from Crete, Epirus, the islands, Thrace, the Pelloponese and lost Greece1. With songs that she herself discovered and collected over many years of wandering, recording equipment in hand, around Greece. She is accompanied by singers and musicians who with their lutes, fiddles, clarinets, daoulis (drums), defis (tambourines), tsabounes (island bagpipes), santouris (dulcimers) and tumbelekis (drums) have flooded festivals and feasts all over Greece with their music.

Domna Samiou first became acquainted with our musical traditions at the young age of fourteen, through her teacher Simon Karas, from whom she also received instruction in Byzantine music. [...]

If she were to point out some of the happiest moments of her career, she would indicate her participation in the 9th English Bach Festival in London last year. There, invited by Lila Lazanti, she participated with her group in the rendition of heroic songs. She would also point out her record that circulated a few months ago under the label of the French record company 'Chant du Monde', in their renown series 'Ethnology Vivante'.

The program [at the 'Kytaro'] is different every Monday. Domna Samiou's songs interchange with dancing, which is performed by the Eleni Tsaouli Greek Folk Dance Group. A troupe which, although entirely amateur, through its devotion and good spirit, dances to the Greek rhythms with exemplary authenticity. This is the result of a lifetime of work by Eleni Tsaouli, the dancer who, following her brilliant studies in classical ballet, chose to devote herself to researching and reclaiming our dance traditions. This pioneering struggle, reckless from the start, persevering and enthusiastic, has continued ceaselessly since 1954, for eighteen years, without any outside funding.

The idea and initiative of presenting folk songs and dances at the 'Kytaro' belong to Dionysis Savvopoulos. The result achieves something important. Suddenly, you realise that the folk songs, powerful and stirring, have ceased to be of archival value, quaint folklore or to be a genre to be shown off at festivals and National celebrations. They become a living reality, with vibrant tangible functions.

1Lost Greece: the term is used to describe the areas, promarily in contemporary Turkey, were large Greek populations existed in the past. 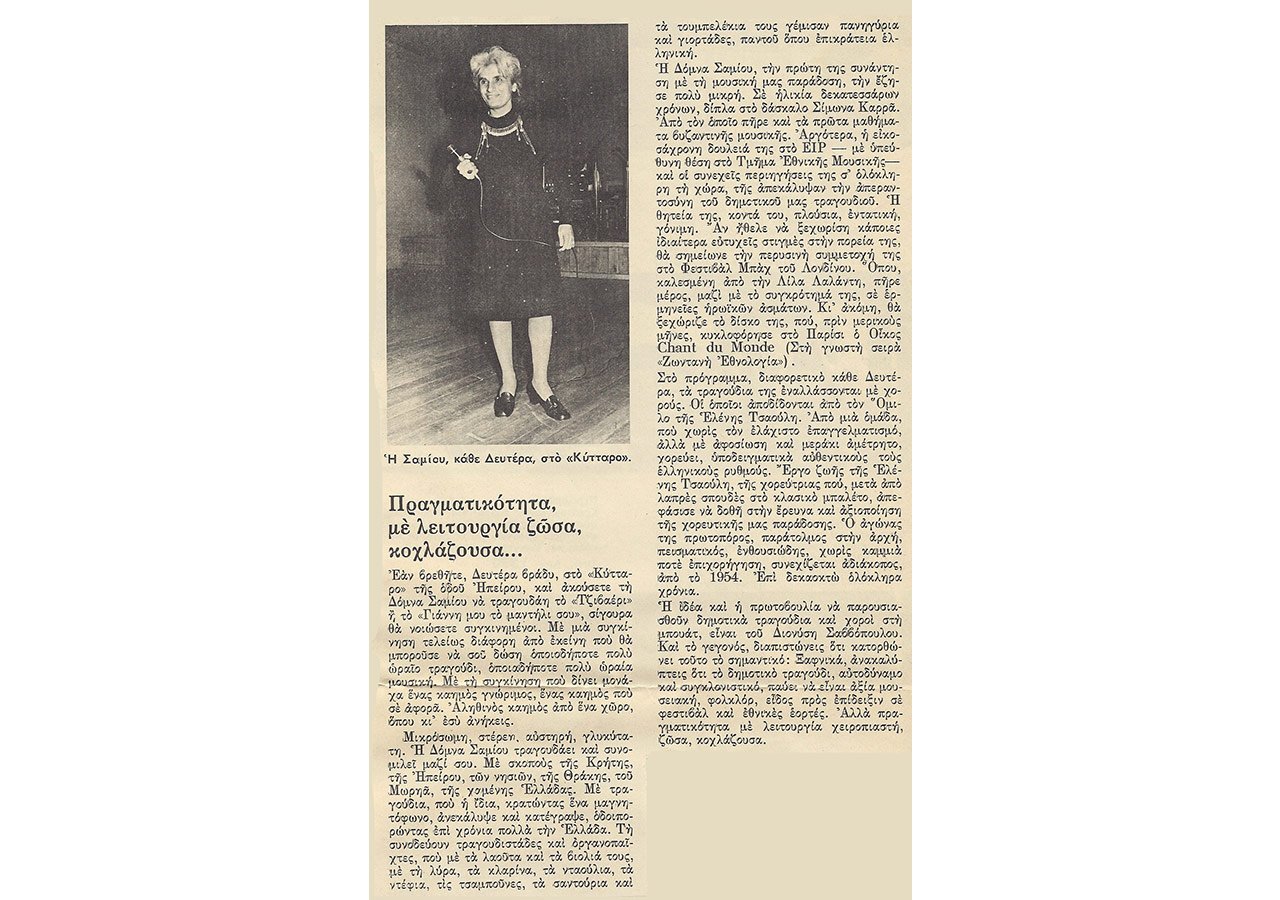