You are at: Home page Her Work Press Clippings and Interviews A Greek musical tour in Sweden

A Greek musical tour in Sweden

Sweden received Greek traditional singing with an enthusiastic welcoming, during a musical tour covering 6,500 kilometres in the distant country. A tour which lasted a whole month, with performances in towns, villages, castles and prisons...

Domna Samiou was in charge of the tour, together with her collaborators, musicians of traditional music and a troupe of dancers from the 'Eleni Tsaouli' group. They gave sixteen performances in fifteen different venues, which were attended by more than ten thousand spectators, most of them Swedish, who were brought in touch with traditional Greek music for the first time.

The success of the tour was so great (as was proved by the response of the public and the critics), that it led immediately to the prospect of the event being repeated in the near future and also for other  forms of projection of Greek folk music [to be pursued] in Sweden.

More specifically, three half hour programs were recorded for the Swedish radio and in September a record with traditional songs will be issued, which will be distributed gratis in schools, other educational or cultural establishments etc. During the same month, Domna Samiou is planned to make another tour in Sweden, performing mainly in schools, as well as perform in other Scandinavian countries.

'There was a lot of enthusiasm from the Swedish audiences during our performances.' Domna Samiou stated herself. 'The musical genre was of course unknown to them, but they were impressed by the sounds, the rhythms, the movements and the Greek costumes.'

In the performances, which were organised by the Swedish Concert Organisation, dances and songs from various parts of Greece were performed; from the Aegean islands, Thrace, Macedonia, Crete, Asia Minor, Dodecanese etc. And there were two different programs. One of longer duration, lasting about eighty minutes and one shorter one of about fifty minutes, which were presented in the different towns depending on the case.

'Another thing that was very interesting, for us this time, was our meetings with various Swedish groups in local festivals and events. That way we managed to get to know the music and the dancing traditions of this land, which the Swedes have been trying to revive for about ten years now.'

Apart though from Domna Samiou's personal impressions and those of her collaborators (Petros Kalyvas on clarinet, oud and flute, Stefanos Vartanis on violin, Christos Athanasopoulos on lute, Andreas Pappas on percussion and Apostolos Kyriakakis on Cretan lyre), the reaction of the Swedish people to this invasion of Greek traditional music and dance in their Northern country is also interesting.

It is reported from Sweden that the critics wrote the following, among other things, about the Greek performances:

'...Whoever thinks that Greek music is just the bouzouki, should go and listen to Domna Samiou...' and '...the Greek group was one of the highest moments in the ten year history of the international musical events at Sylia lake...' (In those final performances at Sylia lake, which are very renown in Sweden and abroad, Domna Samiou's group played in parallel with the Moscow quartet).

In closing, the famous Swedish poet Birgen Norman  gave one of the most important expressions of the appeal of the performances (he is one of the leading personalities of the labour movement in his country and a lyricist famous throughout Scandinavia). After watching one of the Greek  performances at the castle of Erland, he wrote the following poem, called 'Nike1 descends on Erland'2 and dedicated to the Greek group and to Domna Samiou:

The night glows blue-red
over the straights of Kalmar.
Upright she stands on the grass
within the walls of the Castle
at Borgeby
wearing her simple white dress.
A Nike that sings
in strict semitones
drawn from the dawn
of European history.
Don't say that she doesn't have wings.
On her shoulders music flutters
from the heart of a people
who never considered dying.

1Nike: ancient Greek goddess of victory. In modern Greek the word has survived to mean victory.
2Originally translated to Greek by Zannis Psaltis. 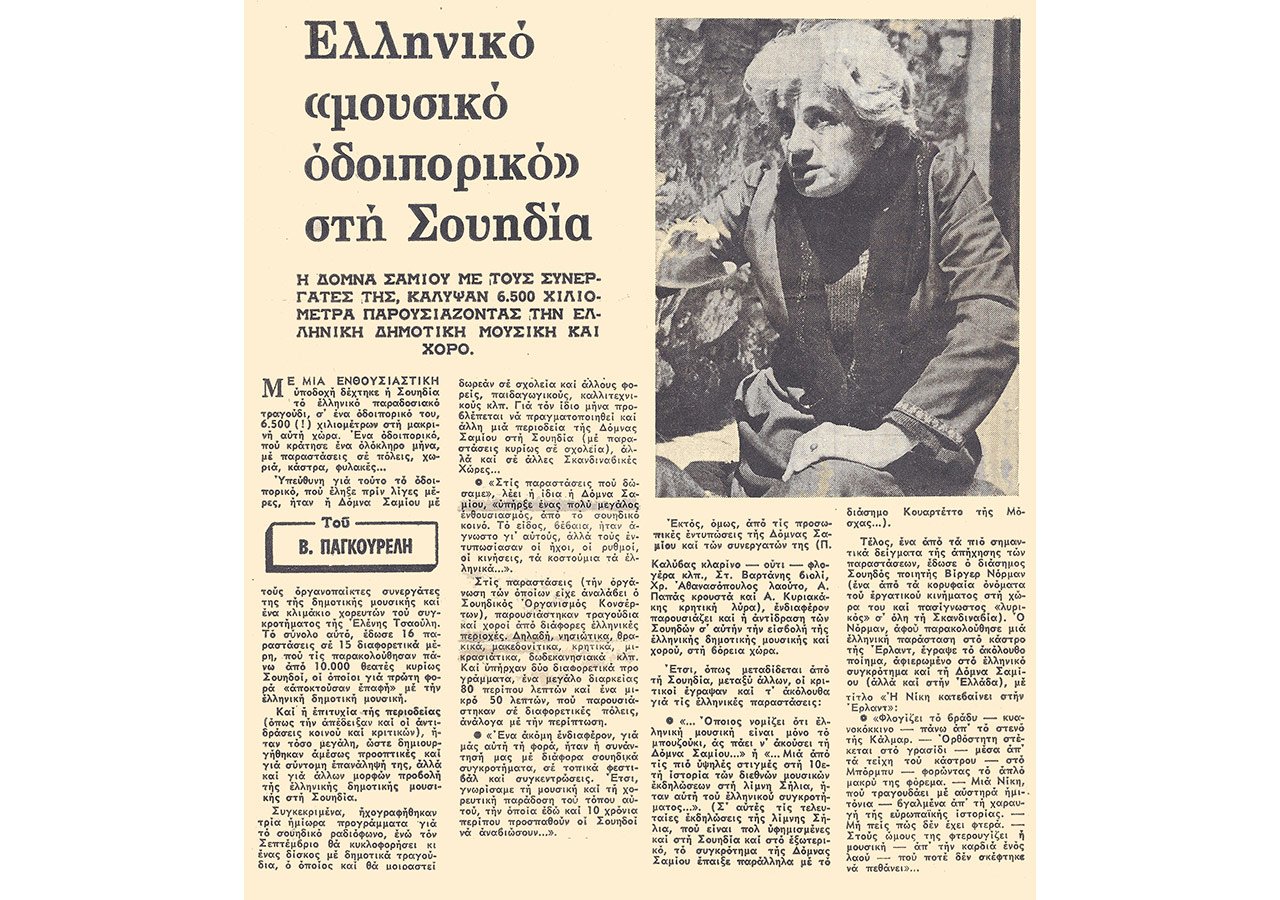 A Greek musical tour in Sweden