You are at: Home page Her Work Press Clippings and Interviews Well intentioned ambassadors

The sound of our traditional music and Domna Samiou in Constantinople

Last night you offered us a feast Mrs Samiou' said the ecumenical Patriarch Mr Vartholomeos after the the service ended, on St Demetrios's day in the temple in Tatavla dedicated to the saint. The expressions of admiration from a large portion of the Turkish audience, who went to thank her after the end of the concert the previous evening,were similar. She herself, [despite] having travelled all over the world, could barely hide how moved she was that she was singing for the first time in Constantinople. A town which is mythical to all the children who were brought up by parents or grandparents who were refugees. Especially those who were born, like her, in refugee shacks, and were brought up with stories of lost homelands, at a time when these tragic memories were still open wounds.

Well meaning ambassadors in difficult and turbulent times, the sounds of our traditional music travelled recently with Domna Samiou to Constantinople. Following an invitation from the Çemal Resit Rey Concert Hall, she presented a two hour program with songs from various parts of Greece and Asia Minor. In the vast packed auditorium of the concert hall, which is the equivalent of  the Athens Concert Hall, the audience, primarily Turkish, but also with a lot of Greeks, followed the program with almost pious devotion.

A few hours before the concert, the success of which owes a lot to the excellent preparation by the Turkish organisers, Domna Samiou sang at the Balouklis Old Peoples Home. Those of us who were present, pilgrims for a few days in the seven hilled city, felt what it means to live, as the last surviving Greeks of Constantinople do, the epilogue of a history whose beginnings are lost in the ages.

The Balouklis Home, one of the  model medical facilities of Constantinople, stands a witness of the brilliant past of the Greek community. The sign at the entrance of the complex, which is spread out in  a lush expanse of 164 acres, reads 'Roum hastanesi' (Greek hospital). It is made up of six clinics housed in thirty buildings and one old peoples home. 'Zervoudakios Clinic of Pathology', 'Syngrou Wing', 'Mavrokordatios Clinic', we read on the buildings of the largest charitable foundation of the Greek community, as we head to the old peoples home.

In the presence of prelates, Domna Samiou offered these people her company with songs from Asia Minor. Lonesome but not abandoned, our compatriots impressed us with their courtesy and meticulous appearance. Especially the women, among whom some veritable coquettes, who return our compliments graciously. And when some of the aged shyly rose to dance the karsilamas1 or the Constantinopolitan hasapikos1, their companions erupted into displays of exhilaration, remembering old celebrations and carefree days in the once Greek neighbourhoods of Constantinople.

On her trip to Constantinople, the singer who studied the music of Asia Minor and made it famous, was accompanied by Nikos Philippidis (clarinet and flute), Yiorgos Marinakis (violin), Socrates Sinopoulos (Constantinopolitan lyre and lafta), Agnes Agopian (kanun), Kostas Filippidis (lute) and Yiorgos Gevgelis (percussion). 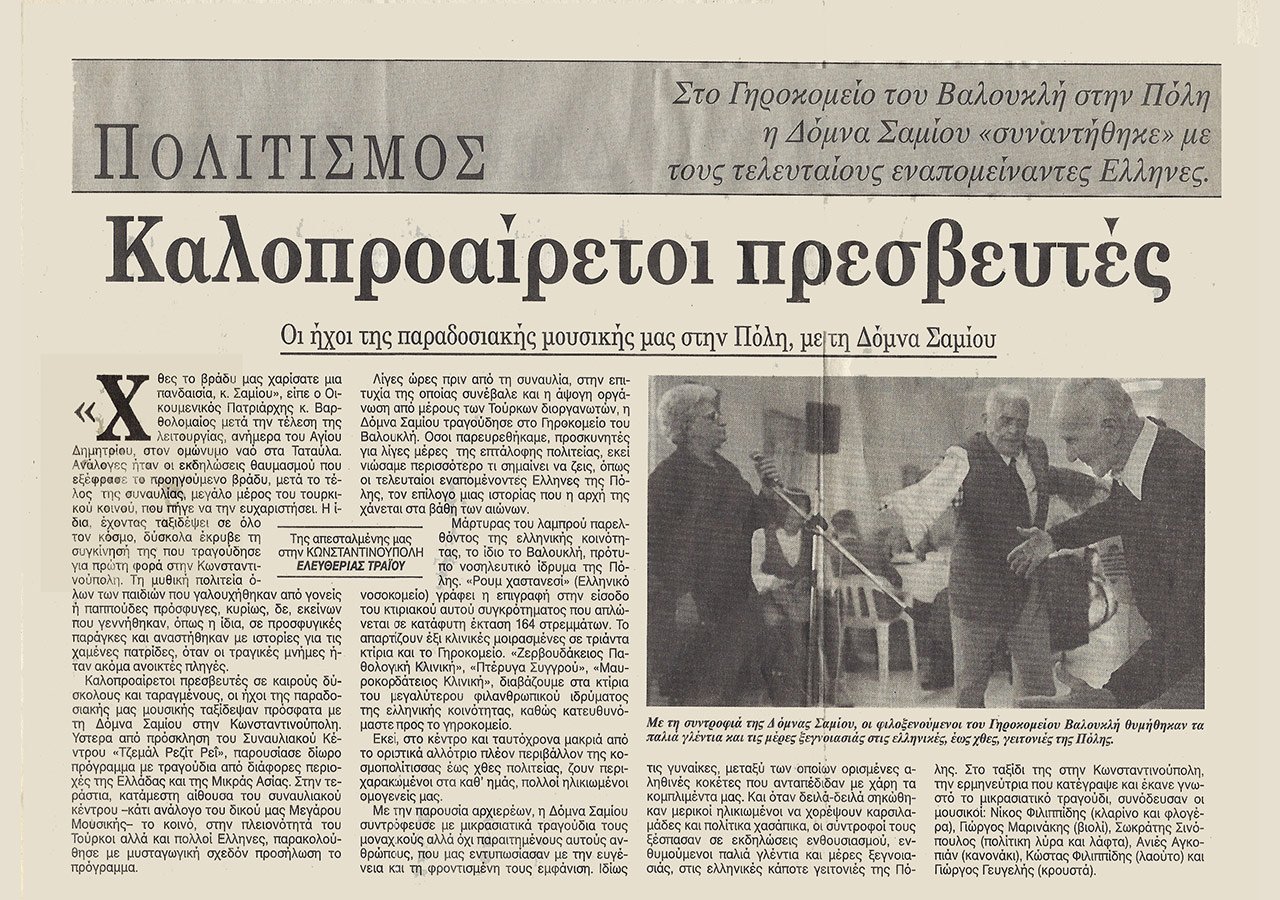