You are at: Home page Her Work Press Clippings and Interviews 'Kindly be respectful to them...'

It is twenty five years since Domna Samiou, the 'great lady' of Greek folk singing, recorded her first LP as an interpreter of our musical tradition in 19711 (she had already been involved in record production since 19582). At the time the song Tzivaeri was becoming a symbol of the youth3 and Domna sang beside Dionysis Savvopoulos. 'What am I meant to do with your songs? They are too sugared for me, they are well suited for sugar-kids, but they just don't feel right to me!' [Domna Samiou once said].

An entire life dedicated to saving, recording and promoting folk song. [She] has trawled Greece making recordings and giving concerts, in a ceaseless struggle against the commercial popularisation and the degradation of our musical tradition.

A life path  full of passion, devotion and endless hours of research, rehearsals, trips to every corner of the country, and abroad too, where she has risen to be one of the most important ambassadors of Greek musical culture. Radio programs, concerts, classes and, most importantly, fourteen LPs and more than twenty small [45rpm] records, constitute the fruit of this struggle. The bulk of her discography is devoted to her homeland, Asia Minor. Because neither the wailing of the women of Kaisariani4, as they waited for those that were still missing, nor the sorrow of the amanedes5, nor the dancing and the celebrations outside the [refugee] shacks with just a large pan for a drum, will ever be out of her mind or her song. Neither does she forget her father, who would take her to church, where she would chant climb up next to him on the pew. That is why in her songs the old musical 'paths'6 of Hellenism pulsate effortlessly, with expressive semitones and the drawn out gliding of the voice.

How many people are there any longer who can produce the plasticity and expressiveness which mark her renderings? Because Domna Samiou was not content with living her experiences, she pushed on to practice and learning. At the tender age of fourteen, she caught the attention of her teacher Simon Karras and was  ushered into the welcoming environment of the Association for the Dissemination of National Music, where for decades now Karras has been teaching young people the music of the Greeks gratis.

In 1954 Simon Karras was also the one who brought her with him to the radio, when the National Radio Foundation had a whole section devoted to traditional music, with constant recordings and broadcastings of authentic folk songs to the whole of Greece. In that way Domna became a true expert and a critic of the [Greek folk] repertoire, through familiarizing herself and getting to know other musical idioms beyond that of Asia Minor.

Her love, her passion and her earnestness can not remain impassive confronted with the sounds of silence, under the tide of violent urbanisation and the 'labelisation' of modern Greece. Her instinct tells her that salvaging is not enough. Dissemination is also necessary. A revival that will lead to the living experience! Domna Samiou loves this music too much to keep in locked up in the audiotapes she stores with devotion on the shelves of her bookshelf. So these days (about a year and a half after [issuing] the Carnival Songs), she offers a Christmas gift of her own to those who wish  to gain greater familiarity with the messages of our traditional music.

The record that has just circulated is titled Kaneloriza, and was independently produced by the Domna Samiou Greek Folk Music Association which she founded back in 1981. The songs have been selected this time on the basis of their metre. [The tracks are either] seven beat (7/8) or nine beat (9/8), and originate in Asia Minor, Eastern Aegean, Thrace, Macedonia, Pelion and the Peloponnese. Both metres are extremely ancient (we come across them in Homer, Sappho and Aristophanes) and continue even today to give wings to the Greek dances, with their power and expressiveness. Most of the eleven tracks on the record appear in recording for the first time and  are either from Domna's musical memory, or from her recordings of music which span the whole of  Greece or from the collection of Simon Karras.

'I tried to interpret the songs in their authentic style, with the musical character of the areas [they originate from]', notes D. Samiou in the extremely tasteful booklet that is included (bilingual and containing the lyrics of the songs), which Lika Florou edited. She brought on board exceptional musicians, among whom stand out Nikos Philippidis (clarinet and flute), Socrates Sinopoulos (playing the Constantinopolitan lyre, but also her valuable assistant throughout in the musical supervision of the record) and Stathis Koukoularis (violin).

Domna Samiou, in approaching the seventh decade of her life, has touched on a self awareness which is apparent through her interpretation [of songs]. Lets wish and hope that in the near future she will be given opportunities to pass on to Greek discography other similarly brilliant samples of her musical treasures. Because it is true that what she has included to date in her records, constitutes just the 'tip of the iceberg' of her musical knowledge and experience. In any other civilised country, the state would have embraced and undertaken to record and promote artists like Samiou and some of her other worthy colleagues (who can be counted on one hand). But in Greece that too has been left to the famous 'patriotism of the Greeks'. And that is why Domna ('the Greek Oum Kalsoum' as she has been called by foreigners) does not give up and continues to do what she considers her duty. She closes her note in the cover of Kaneloriza with the following appeal: 'For those of you who want to sing these songs, I ask you kindly to be respectful them!'.

1In 1971 Domna Samiou issued the record: Travelling in Greece with Domna Samiou
2Domna Samiou worked in musical production and the publication of a number of 45rpm records of traditional Greek music. Some of the recordings were reissued in the following collections: Songs of the Sea and of the Highlands, Songs of Central Greece and Peloponnese, Songs and Tunes from all over Greece
3By implication the youth active against the military dictatorship (1967-1974).
4Kaisariani: neighbourhood in the East of Athens, that was created by Greek refugees from Turkey following the conflict between the two countries which ended in 1922. Domna Samiou was born to refugee parents in Kaisariani and grew up there.
5Amanes: slow, usually sorrowful song with oriental characteristics.
6'paths': reference not only to the literal meaning of the word, but also to the Makams of oriental music. 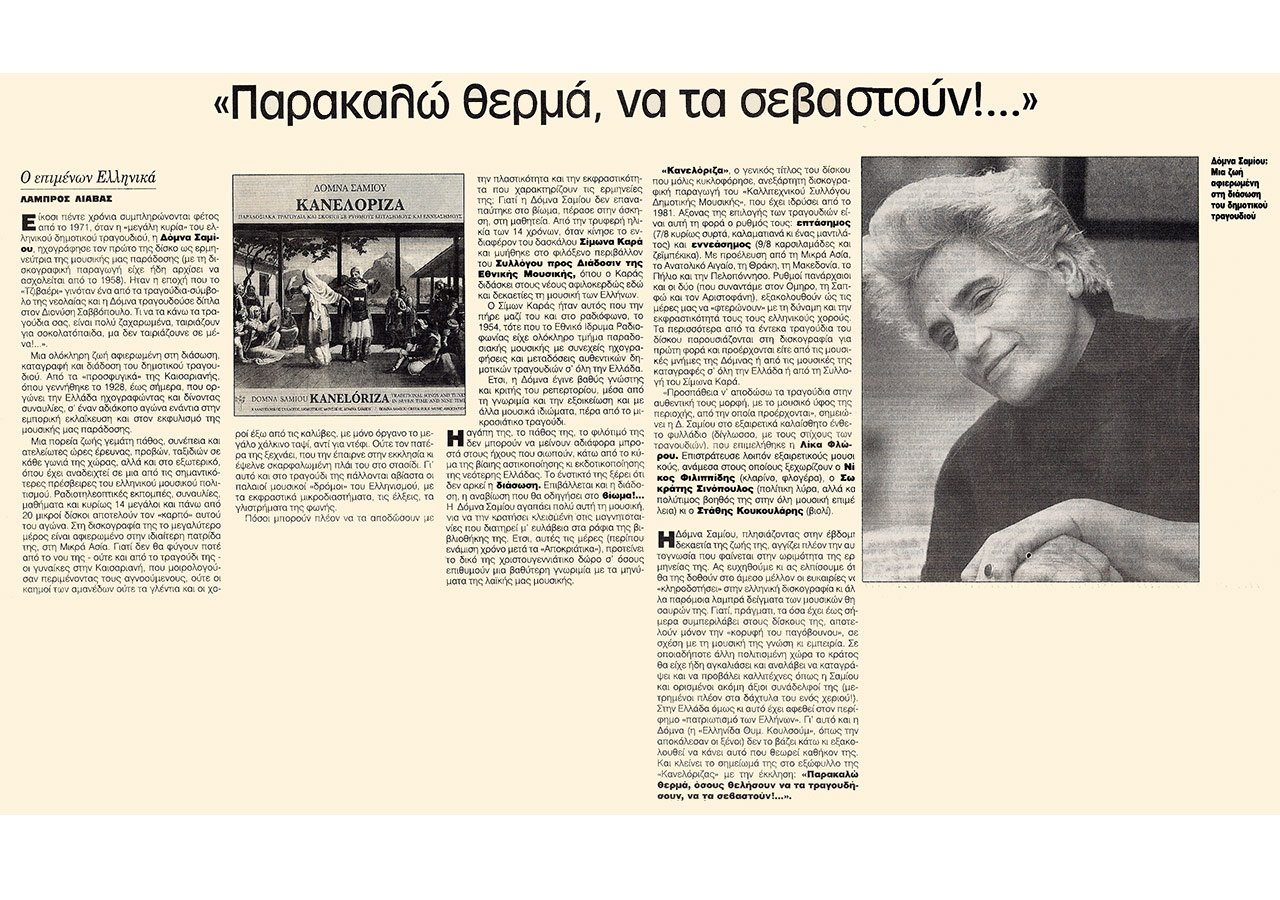