You are at: Home page Her Work List of Songs The Lament of the Virgin (Pontus)

...
Do you not see that naked man, forlorn and sore afflicted,
who wears a garment steeped in blood,
a thorny crown upon his head?
That man is your beloved son and he’s my teacher too.
...

The Moirolóϊ or Lament of the Virgin, very widely known throughout Creek lamb, is a long medieval rhyming poem of literary origin, but impressively familiar to broad sections of the populace. Influenced by relevant passages in the Gospels and by Church hymnography, it is an anthropocentric narrative lament for the sufferings of Christ on the way to his crucifixion and death, as observed through the eyes and felt by his tragic mother. Chanted by women around Christ's tomb in the manner and style of the mundane dirges they know so well, it expresses their compassion and identification with the maternal, human nature of the Virgin. Nonetheless, the. way in which it is ritually performed lays bare the custom's pre-Christian origins.

While there are local differences in some features of the song or in its melodic treatment, the structure and form of the moirolóϊ as well as its performance bear impressive .similarities to those sung in lands as far apart as Lower Italy, Pontos, and Cyprus. The continuity of its narrative flow is clearly evinced in the sequence we have dared to select here of passages occurring in versions of varied provenance. Miranda Terzopoulou (1998) 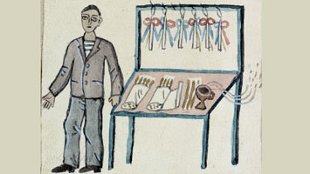 Young Evyenoula, comely lass, the lass who married early and boastfully was wont to say that Charon would not get her becau...

Glory of the Ainoi: The woman who was a sinner...

2nd Mode. Glory to the Father and to the Son and to the Holy Spirit. The woman who was a sinner hastened to the market, tha...

Marandon has received the order to go to war. He forges horseshoes of silver and nails of gold, He shoes his black steed by...

THE KATHISMATA 3rd Mode. Τhe harlot came to You, O Merciful Lord, pouring out on Your feet myrrh, mixed with her tears, and...

Holy Week Lament ... – Be off with you, you gypsy scum, and may your hearth grow cold, and may you lack a second shirt to clothe your wretch...

They stay with the bride for two days, for three, Her dress they give her and her veil, but no wedding crown.1 Beloved st...