You are at: Home page Her Work List of Songs Koursariko 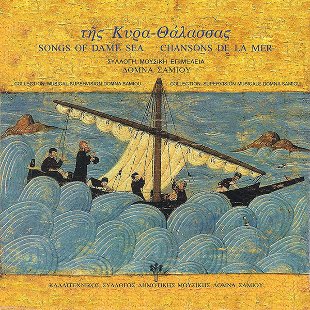 A dance tune from Fournoi, Ikaria, in a 2/4 rhythm. Its name is linked to various aspects of oral tradition regarding the history of Fournoi, a group of islets between Samos, Ikaria and Patmos. The islands are also known as the “Korseí”, a word which derives from their ancient Greek name, “Korásioi”, but which the islanders rather associate with the homophonic word “Koursároi”, which means corsairs and piracy in general -after all, it seems likely that the coasts of this small archipelago did provide Aegean pirates with ideal coves in which to lie waiting for their victims. Interestingly enough, the Association of Fourniote women in the USA have chosen to call themselves “The daughters of the Corsair”.

The tsaboúna (hornpipe) is a popular wind instrument related to shepherds and rural life which is found throughout the Aegean. It consists of three main parts: a goatskin bag in which the air is stored, the mouthpiece, and two reed pipes fitted into a base attached to the bag. The melody is played on one of the reeds, which has five holes, while the other, which usually has fewer holes, serves as a drone to fill out the melody. The tsaboúna is usually accompanied by the toubáki (a small daoúli), and less commonly by a lyre or lute. The materials of which the tsaboúna is made, and its use in ritualistic celebrations, all attest to roots in a pre-modern society arranged around agriculture and stock rearing and hence to the antiquity of the instrument.

The piece is associated almost exclusively with the hornpipe virtuoso, Theologos Gryllis.