You are at: Home page Her Work List of Songs Song of Saint George 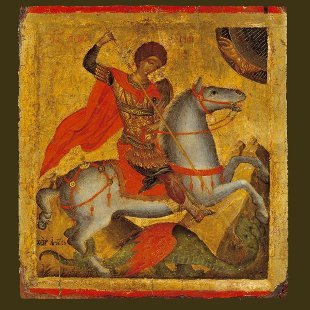 O sainted George and honoured master, rider of the grey horse,
accoutred with a trusty sword and with a golden lance,
it is my wish to compliment your glory and the prowess
with which you slayed the monstrous beast, the huge and fearsome lion;
at large about our neighbourhoud its lair was in a deep well,
and it was fed with human prey both morn and evening.
Once when they failed to offer it a human for its supper
it would not free a single drop to slake our thirsty people.
They then cast lots to see whom fate had chosen as its next victim.
It happened that the lot did fall upon the lovely princess
who chanced to be her royal mother’s one and only daughter.
Now when the king was told the news, he fell down in a dead faint.
No sooner had they brought him round, he spoke the words that follow:
– I would exchange my life for hers, if you would spare my daughter.
His subjects gathered in a crowd beneath the palace windows.
– Give us your darling child or else instead of her we’ll take you.
The king took note of what they said and went out to address them.
– Deck out my darling child in white, as a young bride bedeck her,
present her to the dragon thus, a gift for him to sup on.
[She went her way along the road and met a lonely horseman,
he had a broad sword in his hands, around his waist a cutlass.
– Where you are going, dearest girl, I shall go too and save you,
I’ll save you from an awful death, deliver you from torment.
– Good stranger, those are idle words with which you would console me,
for when the monster leaves its lair you’ll ride off and forsake me.
– Let me rest against your knees, I’ll snatch some sleep until then,
but once the monster leaves its lair I’ll leap into my saddle.
Straightway the stranger fell asleep, the girl as soon was yawning.
Then fearful tremors shook the well, and sallied forth the monster.
– Rise up, rise up, good master quick, the water’s all a-bubble,
the monster’s grinding his sharp teeth, I’m staring at his dread eyes.
George was awake and stared like one who is half crazy,
he drew the cutlass at his waist, as he had learnt to do so,
and with a single blow he smote the monster’s fiery visage,
and lo, the monster stretched its length upon the ground it stood on.
– O sainted George and honoured master, rider of the grey horse,
in worthiness and feats of strength where is the man to match you?
– And who are you who knows my name and claims acquaintance with me,
unless you be a demon fiend and stand right there before me?
– I am no fiendish demon, I, to stand right here before you,
but I confess that while you slept a dove alighted by me,
in its right foot it firmly held a portion of the True Cross
and on the Cross there was a name: Saint George is what the name was.
– Be off, my girl, be off back home, back to your parents’ palace.
Tell them to have an icon made, to build a thankful chapel,
and on the right to place the Christ, and on the left the Virgin,
while on the altar stone they must inscribe ‘Saint George’ and naught else.
She tied a ribbon of gold thread around her golden tresses,
and on that day the whole world sensed a great relief and gladness.] 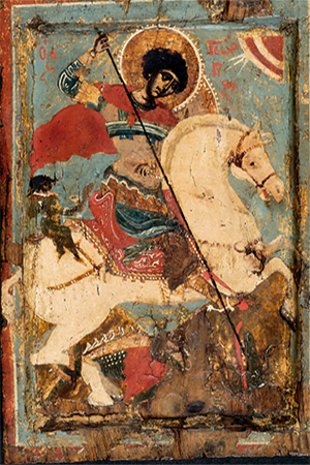 Saint George is the saint most revered by the faithful of the Eastern Church. His depiction in iconography as a young warrior on horseback has given rise to a similar image of him in popular imagination. He has become the saintly adversary of evil and injustice, the protector and liberator, and a hero upholding all that is good, a source of all hope.

It is not without significance that his feast day is not only confused with Easter but is virtually identified with it, so the saint’s already rounded character is further enhanced by the attributes of a hero of springtime who, like the resurrected Christ, marks the opening of a new period, the season of fair weather. It seems only natural that when new tasks are facing the farmer, when flocks are being driven to fresh pastures, and contracts for agricultural products are being signed the saint now celebrated should be chosen as the supreme protector of arable- and stockfarming communities throughout the Near East. There his feast is observed with votive offerings and visits to holy places in the countryside, with animal sacrifices, merrymaking, and play with swings. 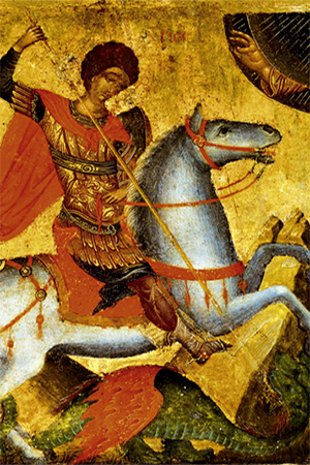 Muslims also pay great honour to Saint George or, more correctly, to a similar sainted person, either by joining in the Easter celebration of the Christians or holding their own festival, Hidirellez, on the 6th of May in the old style calendar (the 23rd of April, the feast of Saint George, in the western, Gregorian calendar). This day marks the opening of their festive cycle, too, and is celebrated in comparable manner.

Scholars attribute the particular intensity of the worship of the saint in the Balkans and the Near East to the powerful influence of local pre-Christian and pre- Islamic divinities, such as the horseman Thrakas and the mounted gods of Persia. Even setting aside any such identifications, these festivals with their common characteristics are thought to point once more to pre-Christian spring ceremonies whose purpose was to further and celebrate growth and fertility. Miranda Terzopoulou (1998) 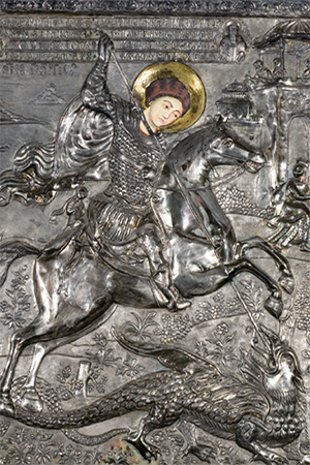 The Song of Saint George is an Easter song danced with the steps of the kamàra by women only at the opening of the community’s celebrations, in which everyone joins in. It is performed at any time after the Second Resurrection and during the next two days. When Saint George’s Day precedes or follows Easter, the same song is again sung and danced by the womenfolk on his feast in the courtyard of his church.

This popular and widely known long verse, composed in the original Greek of fifteen-syllable rhyming couplets of literary origin, is sung as the singers dance or during house-to-house rounds or is simply recited on the saint’s feast day. In close correspondence with stories about the saint so far as its subject matter is concerned and with his iconography in respect of the description of the hero in armour and on horseback, the song relates the legendary incident of the saint slaying the dragon and rescuing the king’s daughter.

N. G. Politis maintained that both the song and the legend echo popular traditions about dragon-slaying heroes, at the heart of which, in his opinion, there lies the ancient myth of Perseus and Andromeda preserved in the region of Cappadocia, which he considered to be the geographical origin of the song. The myth about the slaying of the dragon has been absorbed into the lives of many saints, perhaps because the allegorical meaning attached to the dragon as the devil subdued by the power of faith exactly complemented the attraction which, one way or another, the gallant figures of Christianity’s young fighting horsemen exercised over the simple minds of the newly converted. Miranda Terzopoulou - Zoe Margari (1998)

Domna Samiou collected the song in Skiathos Island in 1975, sung by an old woman.

In the same tape, Maria Agiioti 87 years, recites the lyrics of the song.

There is a newer version of the song in  Domna Samiou's music archive, taped in Athens in July 1997, when Domna Samiou visited Yannis Parisis in a clinic in Athens where he was hospitalized. 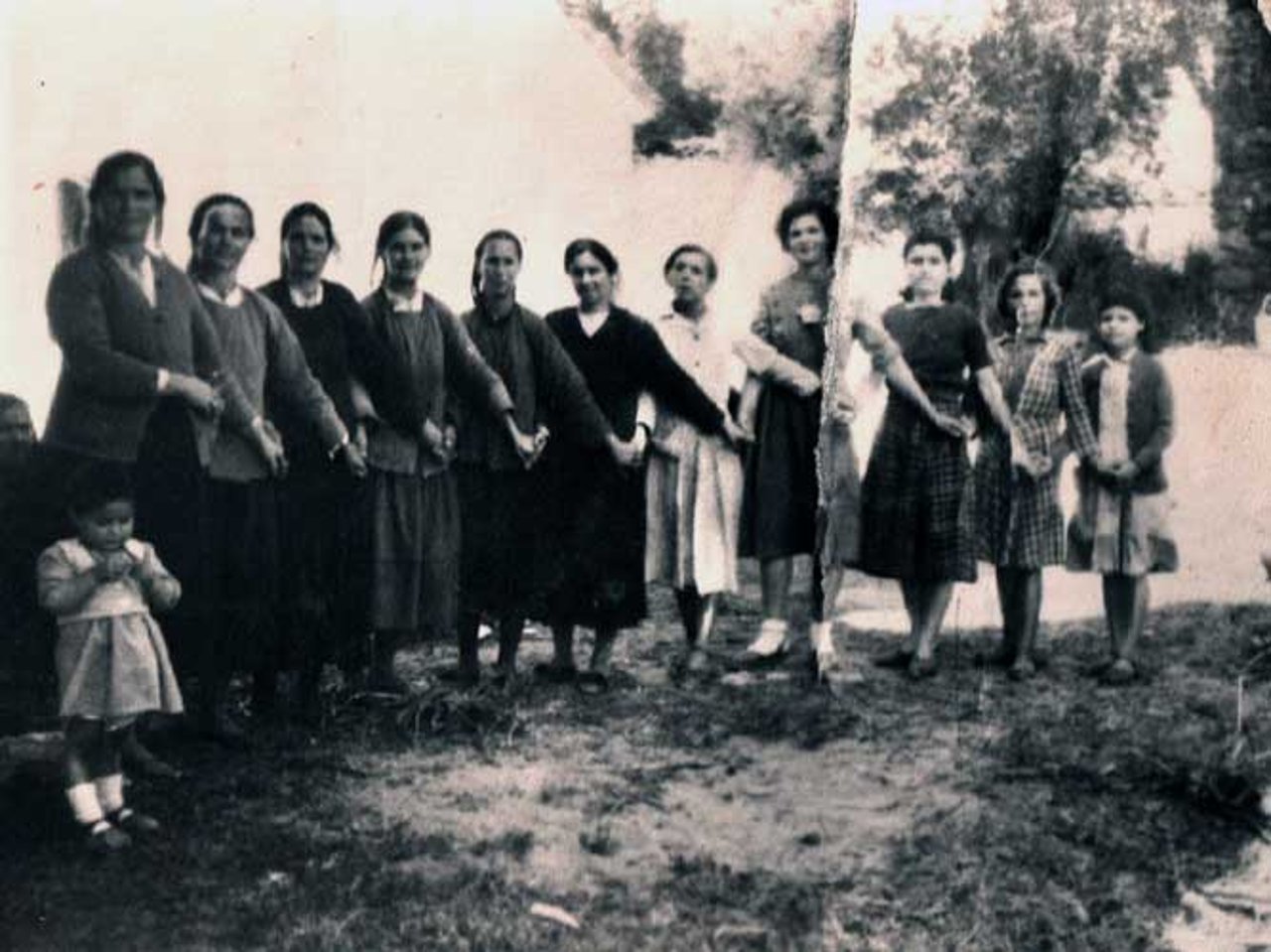 St. George, the most revered saint of the Eastern Church is the saint-fighter against evil and injustice, protector and liber...

Again They Entered in the Dance

Again they entered in the dance, four eyes as dark as olives, four eyes that weave like shuttle through the hearts they brea...

Down in the open countryside – why, down there, don’t you see? down there, where all those flowers are blooming, that’s whe...