You are at: Home page Her Work List of Songs My Heart-Sick Bird Flown Far From Home

My heart-sick bird flown far from home,
joy you bring those far-flung lands,
sadness all you leave behind.
What'll I send, beloved stranger,
to you there, in foreign lands?
If I send an apple, it will rot,
if I send a quince, it will wither.
If I send my tears on u golden handkerchief
my burning tears will set it alight.

A song from Pogoni, Epirus. A syrtós in three, performed here by the classic Epirote band of clarinet, violin, lute and défi (a kind of drum, daf in Farsi).

The life and history of this land, this Greece that’s so welcoming and yet so harsh to its children, has long been intertwined with the reality and the pain of uprooting. Since antiquity, the routes across its rough-hewn mountains and unpredictable seas have availed themselves to departure, though not to return.

The wave of migration towards Central and Eastern Europe and the East that followed in the wake of the Ottoman conquest of the Balkans provides the initial historical and social context for the emergence of an important category of folk songs: the songs of Xenitiá. When expatriation became a systematic, mass phenomenon, the act of quitting one’s homeland took shape in the popular consciousness as the inevitable fate of young men who would venture out into the world in search of knowledge and fortune, a compulsory rite of passage from the safety of the familiar and the collective to far-flung “foreign places”, threatening and unknown. Because Xenitiá was a permanent condition and not limited to a given period, these songs were always sung at family and social occasions of every kind; given the pointed absence of the departed, they reproduce the ideology of expatriation imposing both a stance as well as the emotional responses towards it. The emigrant / immigrant’s fate, on which the songs are almost didactically explicit, is as dismal as death: loss of social status, misfortune, loneliness, sickness. And while these tribulations may seem to express the pain of those that left, they were actually brought into being by those that stayed behind and express their feelings regarding the loss of those they love. It is the stay-behinds’ ignorance -and mythologizing- of life abroad that makes the songs of Xenitiá so unique and so similar to dirges, which treat the equally unknown and terrifying Underworld in a similar fashion. 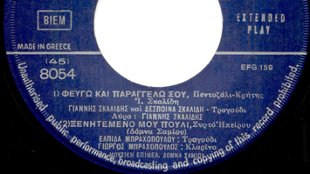 There in the sky that you fly, my lady turtle-dove, when from these hights you're looking down, did you by chance see my lo...

Forgetful, I Am Truly Glad

Forgetful I am truly glad, but mindful I am saddened; remembering those foreign lands, I want to set out for them. – Get up...

The Maypole and Other Local Carnival Traditions