You are at: Home page Her Work List of Songs The orphan maid is wed & Beloved stranger so far away

They stay with the bride for two days, for three,
Her dress they give her and her veil, but no wedding crown.1

They send word to Hades and summon her sire.
Her sire gets word and calls Charon in his turn.
“Come, Charon, let’s wrestle on the bronze threshing floor
And if it so happens that I beat you, then joy is me
And if it so happens that you beat me, then woe is me”.
They wrestled, they wrestled and Charon was not defeated.
Listen to what her sire bade from Hades:
“Let my friends eat and drink
And let them stand at my daughter’s side”.

Two very well-known and well-loved songs from the Black Sea, one a wedding song, the other dealing with uprooting, both with fifteen-syllable lyrics.

The taking of the orphan bride is an extremely moving wedding song sung to a slow, sad melody. It is the work of a powerfully poetic and original imagination. It is sung when the wedding party goes to take the bride from her home and accompany her to the church. Seeking to emphasize the absence of the bride's dead father from this key moment in her life, the popular poet was inspired by his intense emotions to create this minor masterpiece. The orphan bride is prepared by relatives and friends, but they don't take her to the groom to be wed, and the wedding is put off for two days, then three. In the meantime, the dead father hears of the happy event in the Underworld and challenges Charon to a wrestling bout, in the manner of the Akritic poetic tradition which remained very much alive in the Pontos until the population exchanges of the 1920s. If the father should win, he will win his resurrection and share his daughter's joy. But despite his unceasing efforts, invincible Death prevails, as is only natural, and all the father can do is send a message to the relatives and friends. They should, he says, stand at his daughter's side for him, and eat, drink and be merry, as befits such a joyous occasion.

The second song, that of the 'stranger', which is danced at Pontian wedding feasts to the rhythm of the kotsangél, belongs to the songs of uprooting category which we usually find listed as “songs of the Witch” in literature. These are undoubtedly among the most popular and widespread of all Greek folk songs; indeed, according to the Hellenic Folklore Research Centre of the Academy of Athens, over 220 variations have been recorded! These come with a range of titles including The song of the Armenian / Atzem / Frankish Maid, The ships are launched, and A Cretan ship. The epithets denoting the nationality of the brides reveal the geographical dispersion of the Greeks: from Francia (Western Europe) all the way to Armenia and Persia (Atzemia) in the Caucasus and the Middle East.

The Pontus, too, like Cappadocia, was formerly a major source of emigrants from Asia Minor to, in the main, the Caucasus, Southern Russia (Crimea, Odessa, Mariupol, Rostov, et al.), Istanbul and the Danubian principalities of Wallachia and Moldavia (Bugdania).

The migrant, the victim of the economic and social conditions of his era, is forced to emigrate by poverty, barren land, over-population, unemployment and want. “In lands unknown” he creates a new family and a new life. A foreign woman is responsible for this, a seductress and a flatterer with supernatural powers. So the ‘man in foreign parts’ does not return home, because the witch keeps him prisoner. Every time he prepares to return, circumstances prevent him from doing so and he feels wronged, his emotions painful and unpleasant. The popular poet provides an imaginative explanation: the woman has entrapped him, because she casts spells on the means of transport (the boats) and on nature itself (the sea) so everything works against his leaving.

The witch represents evil through her magic, but also the uprooting itself, which lures people to uproot themselves and then won’t let them go. Seductive and deceitful, she tricks the foreigner, gets her hooks into him, and keeps him far from his homeland and his loved ones, even though he never stops pining for them. As such, the subject calls to mind the scene from the Odyssey in which Odysseus / Ulysses is ensnared by the witch Calypso.

We find similar themes of trickery, deceit and eternal bondage in a number of dirges from the Pontos and other traditionally Greek areas in which Charon leads people astray, then keeps them at his side for ever more. 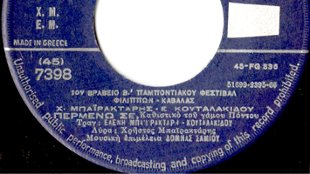 I Wait for You

As Akritas Was Ploughing

Bless Us, Christ and Holy Mary (2)

The Evil Mother-In-Law Word came calling Marandon up to fight. He forged horseshoes out of silver and nails out of gold and shoed his horse in the...

The Gown of the Bride

We Are Here to See You 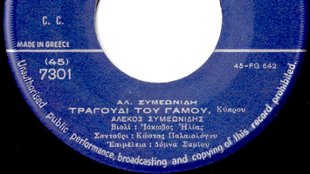