You are at: Home page Her Work Collaborators Thanassis Moraitis 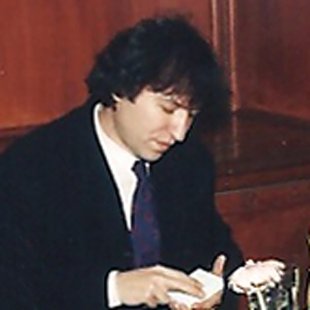 Born in Vagia, a village near Thebes. He studied Politics at the Panteion University; Phonetics and Orthophony, Byzantine music with the Professor and First Chanter of the Metropolis (the Metropolitan Cathedral of Athens) Spyros Peristeris; from 1983 to 1993, he chanted with the Metropolis choir.

Between 1984 and 1989 he collaborated with Mikis Theodorakis, and participated in his Greek and international concerts, as well as in the recordings of his albums.

Since 1992 he has been collaborating with Markos Dragoumis at the Musical Folklore Archives of Melpo Merlie, in matters of musicology related to folk and Byzantine music.

In 1997 he formed the small music group 'Boukourana', which has recorded two albums. Apart from his collaboration with numerous composers, he has also composed many works himself.

Down There in the Island of Rhodes

Κάτω στον κάμπο τον πλατύ Down in the open countryside – why, down there, don’t you see? down there, where all those flowers are blooming, that’s whe...

I Heard You Saying, Didn't I?

I Try to Think of You No More

If Only We Could Meet

Neither in Polis nor in Asia

One Only Heart Is Not Enough (B)