You are at: Home page Her Work Collaborators Nikos Papavramidis 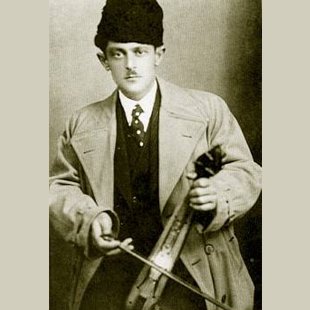 (1907-1995). A virtuoso of the Pontic lyra and singer. He was born in Argyroupolis (Gümüşhane), Pontos, to a family that originated in Kromni, and arrived in Greece as a result of the population exchange with Turkey in 1923.

There exists in the Domna Samiou Archive a recorded sample from the radio program "Apo pantou tis ellinikis gis" ("From every corner of Greek land") (Hellenic Radio, 11/12/1982), where she introduces Papavramidis with the following words:

Nikos Papavramidis is one of the last lyra-players that maintains the tradition of Pontos. These days, unfortunately, though there are many Pontic lyra players, but influenced by the modern way in which traditional music is presented, disfigure the melodies, accompany the lyra with completely unrelated musical organs to supposedly enrich the sound and make it pleasant, and all of it played at a thunderous din through the loudspeakers.

Ο Μάραντον Amarandos has received the order to go to war. He forges horseshoes of silver and nails of gold, He shoes his black steed b...

As Akritas Was Ploughing (The Abduction of Akritas’ Wife)