You are at: Home page Her Work Collaborators Lykourgos Angelopoulos 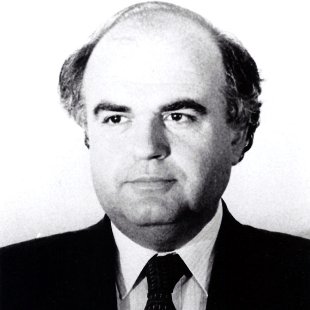 (1941-2014) Βorn in Pyrgos (Prefecture of Ilia) in Peloponnese. He studied Law at the University of Athens and Byzantine Music, under the tutelage of Simon Karas. He is the 'protopsaltis' (first chanter) at the Church of Saint Irene in Athens, founder and director of the Greek Byzantine Choir and professor of Byzantine Music at the Athens Conservatory, the Nikos Skalkotas Conservatory and the Philippos Nakas Conservatory.

He is the director of the School of Byzantine Music at the Dioceses of Ilia, Rethymnon and Fthiotidos and has collaborated with the Athens Radio Broadcast on programs related to Byzantine Music. He has also been active in the field of contemporary music; he is a member of the research team headed by Marcel Peres, which studies the old western chants and their relationship to the byzantine ones. and a member of the artistic committee responsible for the music schools of the Ministry of Education.

In 1994, he was honoured by his All Holiness Ecumenical Patriarch Bartholomew I with the Patriarchal Offikion and was named Archon Protopsaltis (first chanter) of the Holy Archdiocese of Constantinople.