You are at: Home page Her Work Collaborators Glykeria 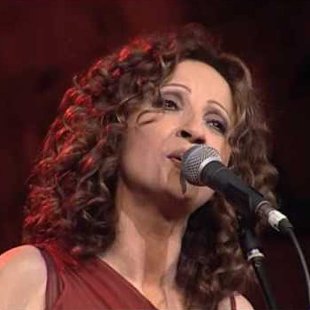 Born in Agio Pnevma, a village in the Prefecture of Serres, Macedonia. She began her career in music in 1974, when she started making appearances in boîtes in Plaka (Athens) next to well-known artists, singing songs by Hadjidakis, Theodorakis, and Loizos, among others.

In the beginning of 1982, together with other renowned artists, she was chosen to represent Greece in the cultural and artistic event ‘Europalia 82’ in Brussels.

She has collaborated with numerous important names of the Greek and foreign repertoire and has made several appearances both in Greece and abroad. In the summer of 1993 she gave two concerts in Israel, and in May 1998 she returned, giving two concerts in Tel Aviv with the Israel Philharmonic Orchestra. The 1st of May 2004 she performed for the first time in Istanbul.

Her rich discography includes her first personal album entitled Sta Matia Koita me (1980), and the landmark album in her career, Smyrneika (Songs of Smyrna, 1981).