You are at: Home page Her Work Collaborators Yiorgos Ε. Papadakis 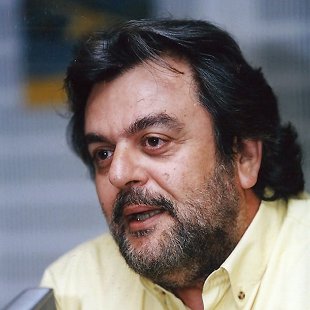 (1947-2013). Yiorgos Ε. Papadakis was a composer, musicologist and researcher. Born in Chania, Crete. He studied advanced theory, composition, and history of music at the National Conservatoire, in Athens.
He worked as a composer for the theatre and cinema, and wrote music for more than twenty-five works for the stage and for thirty movies. At the same time, he worked on collecting musico-folkloric material on the history and evolution of traditional music in Greece.

Since 1975, he worked with newspapers and magazines, and in 2000 became resident music editor of the magazine "Istorika" and of the newspaper "Eleftherotypia". From 1978, he was an associate of the Hellenic Broadcasting Corporation (ERT), as musician, producer and member of the administrative staff; in 1981 he became director of the musical section of the Second Programme (Deftero Programma) station of the Hellenic Radio (ERA), and in 1987, managing advisor of the entertainment section of the first channel of national television (ET1).

From 1993 to 1997 he served as the program manager of the second channel of national television (ET2). In addition, between 1982 and 1999, he was active in collecting and recording traditional music for the Third Programme (Trito Programma) station of ERA; overall, the recordings' archive includes 3.650 pieces of music, by approximately two hundred solοists, part of which was broadcasted by the Netherlands Public Radio. The National Greek Radio followed, with the release of three albums: "Ellinismos se Steria kai Thalassa", "Organa kai Organopaichtes", and "Choroi". Since 1988, he supervised the release of twenty albums of traditional and folk music.

His book "Laikoi prachtikoi organopaichtes" ("Self-taught folk musicians"), published in 1983, included an introduction containing his research and a record of people's accounts. From 1985, he was active in writing television and movie scripts.

In 2002, he became scientific coordinator of the Center for the Study of the Musical Tradition of Thrace, Asia Minor and Euxinus Pontus, and head of the music department of the Lyceum Club of Greek Women.

He worked with Domna Samiou as a music advisor in many discs and concerts.

I Want to Sail Away

I would sail away I would, eri pali in Attaleia’s waters yea, eri pali, with the vessels from Psara, who have sailors true...