You are at: Home page Her Work Press Clippings and Interviews Songs about the sea and the moon

Songs about the sea and the moon

Songs of the sea and a musical promenade with Domna Samiou from the Small Theatre of ancient Epidaurus. Songs about the moon, whilst the full moon will be shining in the sky.

'Our entire country is wet by the sea, and its fate and very existence are intrinsically tied and associated with the waters of the sea' says Domna Samiou, clarifying that the music in the concert in the Small Theatre of Epidaurus will not just be songs from the Aegean islands. 'We will present a 'sea themed' program, which we intend to transform into a feast of pleasure for the spectators, with the beach of Ancient Epidaurus in the background.'

Whoever is in Epidaurus on the 2nd and 3rd of July will experience a different and unforgettable musical evening, where nature will be drenched in moonlight and where tunes from all over our country will pour out of the lips of Domna Samiou. And that is because the finale of both concerts will take place with a walk among the orange groves, where under the sound of the instruments, they will make their way from the Small Theatre of ancient Epidaurus to the harbour, only to continue the merriment with songs about the moon!

'In the age of globalisation, folk song resists. Not only is it not vanishing, but it is spreading its roots among the young people, who are fed up of listening to the nonsense that is being produced in recent years and promoted as music.' the tireless Domna Samiou noted with her well known ease with words. And she is truly indefatigable, given that for forty years now she has been striving with zest, skill and patience for the true revival of our musical traditions.

This year's Musical July at the Small Theatre of ancient Epidaurus (which is part of the Greek Festival), will open with a choice of songs 'of the Sea' which are included in Domna Samiou's latest double cd [Songs of Dame Sea]. Flanked by musicians, dancers and members of her choir, Domna Samiou will present a program which is representative of the rich Greek tradition, with songs and tunes from all over Greece which relate to the sea. We will hear songs about the sea from Pontos all the way through to Karpathos, and from Ierissos to Nisyros, from Kymi to Cesme in Asia Minor and from the Peloponnese to Lesbos and Chios. Among the songs that will be sang are: Should you see a vessel pass (Kymi, Evia), Dear mother, I am awfully tired (Chios), Down on the sandy beach (Trikeri, Pelion), We kissed each other in the night (Skiathos), I want to savour all the months (Propontis), Our fishing-boat a battered hulk (Trikeri, Pelion), Three slender girls (Peloponnese), You quench your thirst... o sea (Cyclades). 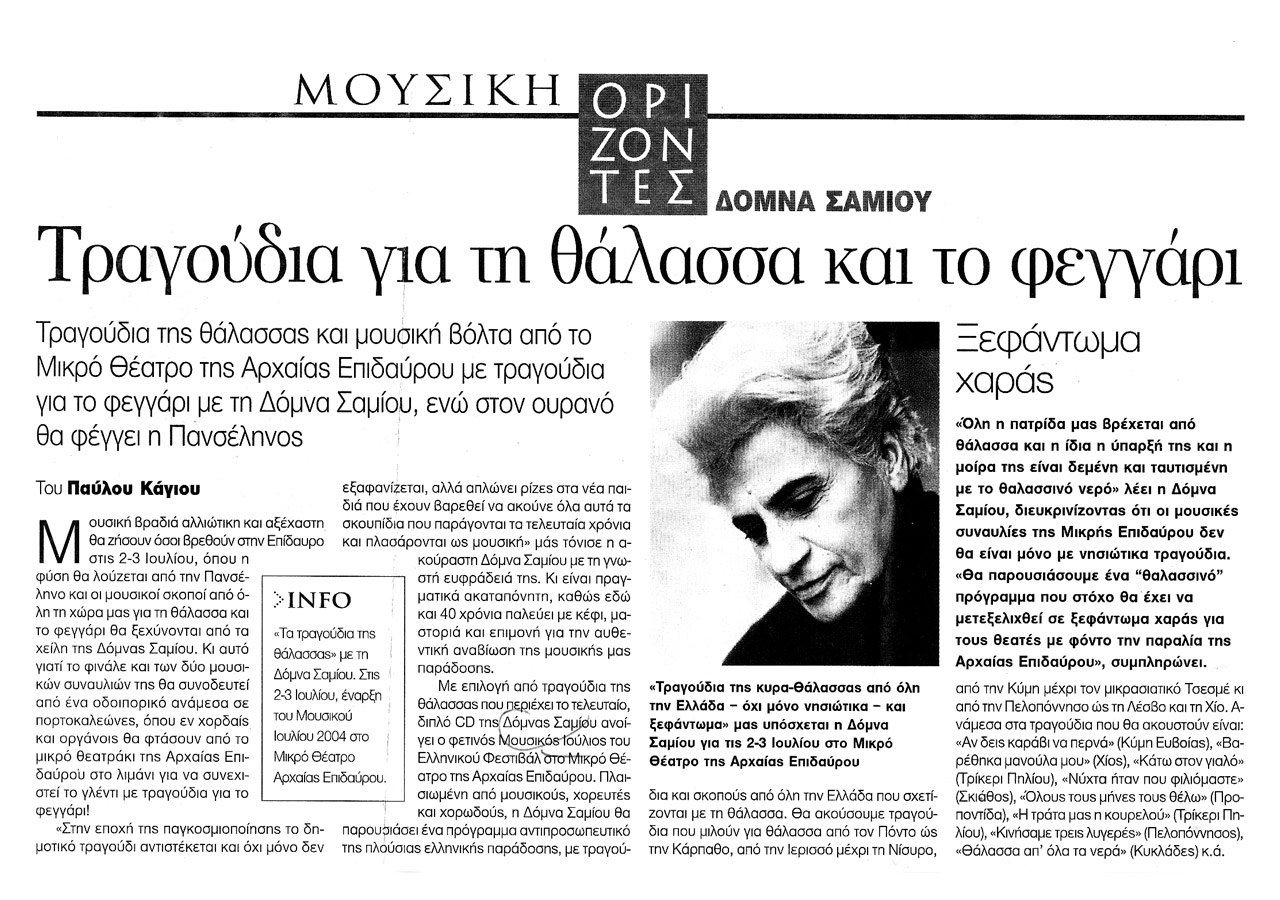 Songs about the sea and the moon