You are at: Home page Her Work Press Clippings and Interviews Greek songs and dances

The greek element in the English Bach Festival which mixes music of the 17th century and of our day erupted on Saturday evening in a full-scale programme by Domna Samiou’s Athenian company of folk singers and dancers. The blind apse which is the Elizabeth Hall platform, so ungrateful for semi-staged opera or oratorio, suits these simple presented songs and dances well, especially the processional ones where the performers mount the stairs at one end, then move slowly across and off the stage. Most of the items included a group of instrumentalists at the back or a single instrument nearer the front. We saw and heard the pontic lyra, a home-made recorded called floyera, bagpipes, dulcimer, the clarinet, which reaced Greece in the 19th century, a fiddle, and drum capable of sudden, exciting variatios of pitch.

All the performers wear traditional costume of equal splendour, whether they are austere black and white or dazzling with colour and gold ornaments. These costumes are an attraction but not necessarily a help. For those who were in Greece at the end of the war and used to watch dancing in taverns where the clients were the performers, where the urban rebetika jostled with rural dances, and where the dancers wore everyday clothes of service uniform, the old costumes can even be a distraction, while dingy battledress made the movements as clear as ballet dancers’ practice costume. All the same, Miss Samiou’s collection was a feast for the eye.

Nationalism no doubt played a valuable part in encouraging the preservation of folk material, but the narrow attitudes it also encourages begin to look rather dotty. On Saturday some of the strangest and most exciting things we were shown came from Greek settlements abroad like Pontus in Asia Minor, whose people were returned to Greece in the 1920s, or from borderlands lime Epirus and Macedonia. There were reminiscences of other parts of Eastern Europe, the 9/8 rhythm which Bartok called 'Bulgarian' occurs quite frequently in Greece. There are slow – quick dances like Liszt’s Hungarian Rhapsodies, the dulcimer is like a small cimbalom, a pontic dance with the knee-movements was familiar from Georgian dances. The black and gold costumes for the Pontic men might have been designed by Bakst for Tamar or by Goncharova for Coq d’ Or. What one wants is an approach which charts similarities as much as differences.

Something of precisely that kind was undertaken by Lina Lalandi the same afternoon in the Purcell Room, when she introduced an informal demonstration of various types of monodic singing from the extremes of the island sea. The programme was called Buzantine chant to flamenco. The Athenian chanter Lykourgos Angelopoulos provided the Byzantine examples, a singer and lute player from Miss Samiou's company gave Greek folk songs, a group from John Hoban's Scuola di chiesa sang Mozarabic chant from Spain in the time of Arab domination, lastly an excellent Spanish chanter and guitarist hurled out cante hondo from Andalusia Whether, or not this programme threw light on the mysterious origins of flamenco, it did offer fascinating contrasts- in performing styles. Moreover, it more than once prompted the thought that something of the old chants, presumably because they are so well adapted to the human throat, survived in the vocal decorations of early 19th century Italian opera. 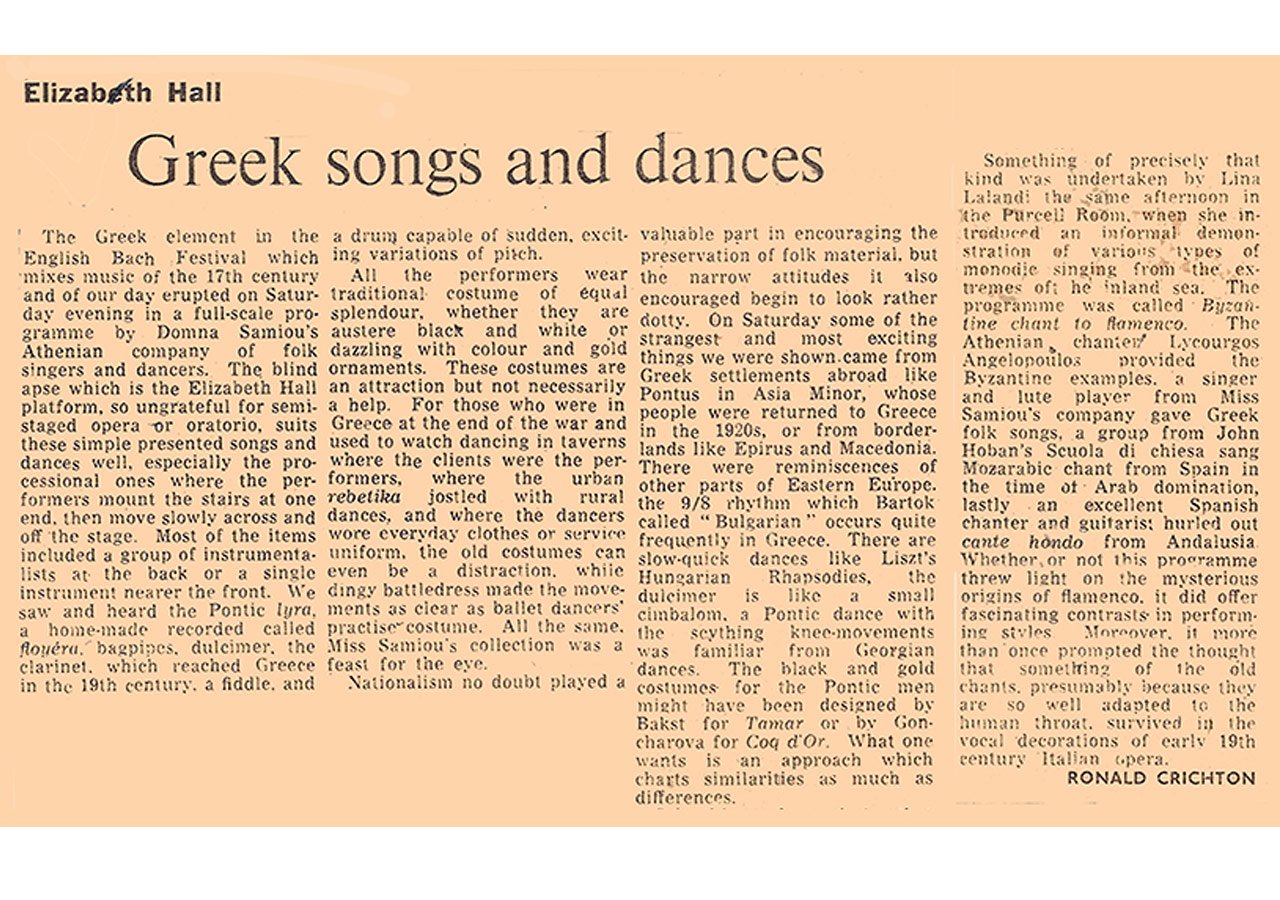