You are at: Home page Her Work Selections Soundplaces 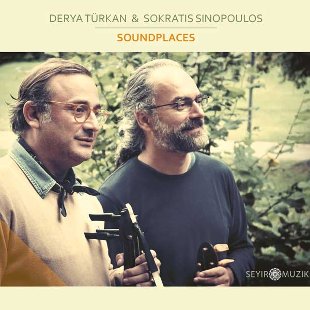 This album has been a dream of a lifetime. After many years of friendship and collaboration we finally record our duet. Soundplaces is a confessional and creative dialogue where we explore the sounds of the musical traditions we love, the sounds of the places that we visit virtually in this album and primarily our inner soundplaces and the ways we can interact and create the narration of this geographical, historical and inner journey.

Starting from Istanbul, the mother of our instrument, and from its supreme art music we travel to the Mitilini island and Izmir’s Rebetiko and from there to the Cyclades islands and Konya – capital of the Mevlevi Dervishes – and back to the Sea of Marmara in Erdek (Artaki) and again to Istanbul, for its taverna dances this time, before we end at the place where we recorded this album, at the church of Saint-Rémi in Fernelmont, Belgium.

We deeply thank Manuel Mohino for his sound engineering and our friend, colleague and producer of this album Tristan Driessens.
Track 08 Soundplaces is dedicated to Neva Driessens.

Derya Türkan and Sokratis Sinopoulos have been the most influential Istanbul kemencesi or politiki lyra performers for almost three decades now. Together they have recorded two albums with the project “Letter from Istanbul” and each one of them has performed very important concerts and recordings as a leader or in collaboration with prominent musicians around the world in a variety of musical styles from classical music to contemporary improvisation.

They share a longtime friendship which started since they met at their late teens and they have been pioneers in collaborations between Greek and Turkish musicians exploring the commonplaces (commonalities)* of the two cultures.