You are at: Home page Her Work List of Songs Our Tráta All Tattered

If mum only knew that I worked on that boat,
she’d send me my clothes and my old breeches, too.

We spread our nets off Karystos one night
and hauled in a load of fish and a squid.

An old sea song once used to set the rhythm for tasks performed by groups of men. Tráta initially denoted the conical net used by fishermen. Over time, it came to mean the boat that fished with such nets as well as the act of hauling the laden net out of the sea, an exhausting job and one that could be achieved only if they all worked in unison. The “Tráta" was such a song, in which one of the work gang sang words to encourage their efforts and the others repeated a refrain. The melodies were rudimentary in such songs, the rhythm of which matched the task at hand and the words of which, erotic or teasing, sung coarsely by groups of men, would mock and simultaneously motivate the singers.

Over the course of the 20th century, from the time it was first recorded, this particular traditional work song -like many others of its kind- was transformed into a song for amusement and dancing, with a wide range of lyrics, moods and performance styles. At some point along the way, the song acquired its current title.

The first recording -and most likely the closest to the song’s original, anonymous form- took place in the USAa, in 1927, by Sotiris Stasinopoulos.

The variation recorded for this album comes from Karystos, in Southern Evia, where it accompanies a syrtós in a 2/4 rhythm. Miranda Terzopoulou (2018).

In Domna Samiou's Archive, there is another version of the song recorded in Euboea in 1976.

The following is another version of the song from Kymi, Euboea by Domna Samiou.

See also the songs Our Fishing-Boat a Battered Hulk (Trikeri, Thessaly),  I Sold my Boat (Dodecanese). 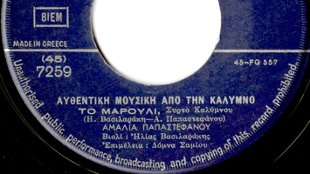 Marouli Exile is the greatest hardship, the parting so upsetting but oh, that greeting  “Welcome home”, oh that Maroúli,1 is bliss. ... 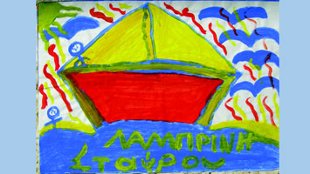 The dance is danced by Kaklamans, a pumpkin serves as drum1. In Trikeri’s old neighbourhood the Kaklamans were dancing. The... 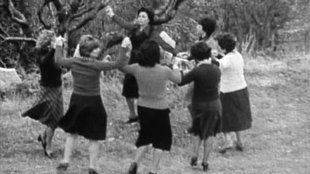 Our Fishing-Boat a Battered Hulk

Our fishing-boat a battered hulk, we cobbled it together, we patched it up a thousand times, it stayed a ragged sight. Our ...

Should You See a Vessel Pass

An’ should you see a vessel pass, passing the cape of Ochtoniá oh take your little kerchief out and wave in signal to me. S...

The Son of the Armenian

The son of the Armenian boasted, my beautiful blue eyes, to a pasha, his master, sing my lovely nightingale. – My master, I... 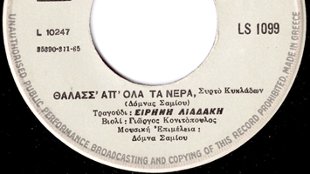 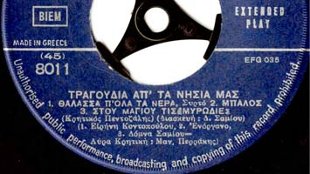